The price system as a communication channel

I may have gotten into an argument with an anonymous commenter on the Economics Job Market Rumors forum whose entire argument seems to be on the order of "info theory is wrong LOL". Sometimes even this kind of arguing can be useful, though; it makes you look at the big picture.


See, the thing is, even if the information equilibrium model is not useful for economics, economists must have some view of the price mechanism as a communication channel. If there is information flowing in markets it has to originate somewhere, move through a channel and finally end up somewhere.


I tried to think of what that communication channel could be -- maybe this is wrong (LOL), but it's a start. So let's start with Shannon's A Mathematical Theory of Communication and his famous diagram:


In economics, the typical description of the price mechanism is as an information aggregator. All of the many details of e.g. weather patterns, the governments that have dominion over the available arable land, seed genetics and crop yields are compressed into a single number and its movements, e.g. the price of wheat. Agents buying and selling wheat are the source of information that is transmitted by the market and received by the market price.


Economics had been working with a rather good solution to this problem for the previous 200 or so years: utility. Instead of a complex multidimensional distribution on the left side, economic agents have a single-dimensional distribution of utility for e.g. wheat. When the price of wheat is high relative to a given agent's utility, the agent doesn't buy it. We replace the previous diagram with this one:

and the information on the right side is approximately equal to the left side: I(Tx) ≈ I(Rx).


[Note that this diagram is an information transfer model and effectively says that utility of a good is in information equilibrium with the price of that good.]


Of course, markets aren't perfect and this description doesn't empirically match up with what happens in the real world (the impetus for the work of Stiglitz to show that the real picture is more like Figure 2). Let's look at the information equilibrium diagram:

How does the information equilibrium view differ from Figures 2 and 3? First, we have complex multidimensional distributions on both sides. Supplies and demand for wheat is different in different locations around the world. Different countries use different amounts of wheat (in some places e.g. rice is the dominant carbohydrate source), and different uses of wheat are more valuable than others (ethanol, bread). Wheat is subsidized in some countries (and states within those countries). Some people aren't able to afford as much as others. In a functioning price system, the spatial and temporal distribution of demands for wheat is equal to the distribution of supplies of wheat. There is a loaf of bread for you to buy at the price you want at the store in your neighborhood.


Just because it is different, doesn't mean it is right. And if it is right, that doesn't mean it is useful. Maybe in the real world I(Tx) >> I(Rx) most of the time. However, economists must have some picture in their head of the price system as a communication channel if it moves information around, and you can't violate mathematical theorems.


In looking again at the utility solution, there is still a massive loss in information going from preferences to utility. Well-behaved preferences (essentially ensuring transitivity so that preferences represent a well-ordered set and therefore roughly equivalent to a real-number representation like utility) wouldn't have as much of an issue, but are empirically false.

The mathematical space of preferences cannot be mapped one-to-one to the manifold of utility -- many different sets of preferences will map to the same utility.

What we have is a water balloon of information. If we try to squeeze it down into utility, it bulges out on another side. 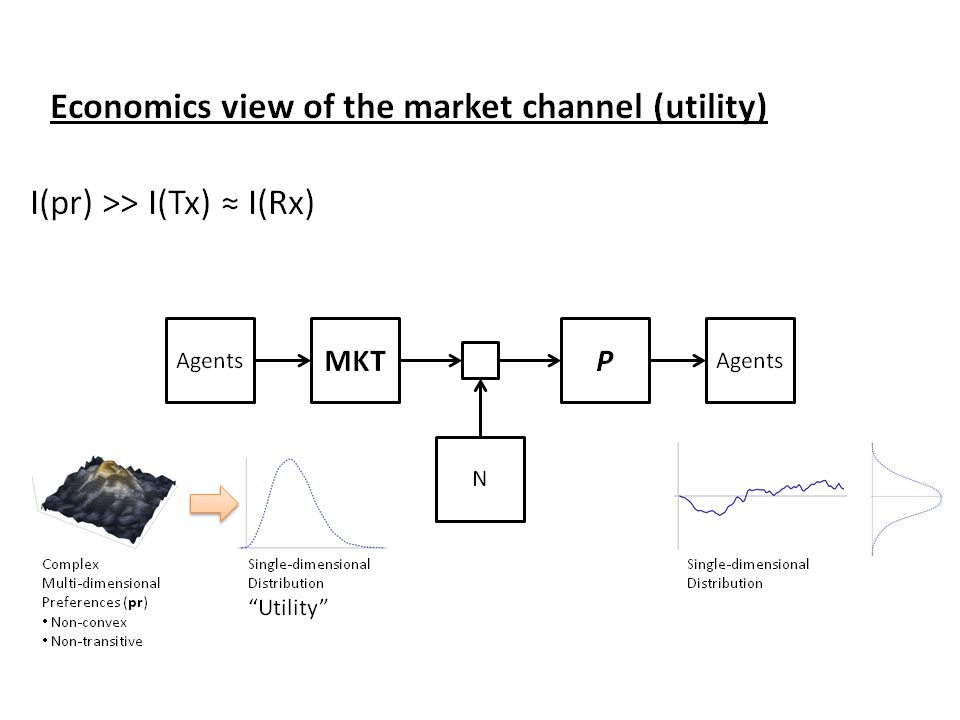 
[1] "THE CONTRIBUTIONS OF THE ECONOMICS OF INFORMATION TO TWENTIETH CENTURY ECONOMICS" JOSEPH E. STIGLITZ (2000). (H/T to afinetheorem for linking to it recently.)

[2] One can measure the information difference between two distributions with the Kullback-Liebler divergence. When one distribution changes, that represents a change in information. That information flows through the market an is registered as the commensurate change in the other distribution.
Posted by Jason Smith at 7:00 PM