Unemployment Rate: Backstroke of the West

I've been interested in labor market data for Washington state — a) because I live there, and b) because there was a natural experiment where the minimum wage was raised to $15 — as well as the West Census Region (WSR). It seems that the region might be showing some economic weakness, and possibly showing signs of recession earlier than the rest of the US. See here and here for some earlier looks.

First, it still looks like a deviation in the unemployment rate for Washington state: 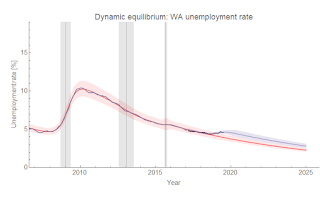 But compared to earlier pictures, the error bands have tightened quite a bit in the counterfactual (purple). This doesn't mean they won't expand again (see e.g. here, going into the Great Recession) — in fact, it means there's more certainty we're seeing a shock.

The same shock appears in the WCR unemployment rate (which population-wise is dominated by California): 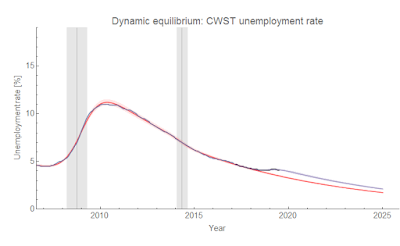 Little blips like this have happened before (in particular in the 90s), so this is not proof positive a recession is beginning. However, like the broader US, we are seeing a deviation indicative of a non-equilibrium shock in several of the JOLTS measures for the WCR (click to enlarge):

And also like the broader US, the hires measure is showing a lot less of a deviation than quits or openings. But WCR JOLTS hires are showing more of a deviation than the US JOLTS hires, possibly helping us understand how the blips above show up in Washington state and WCR unemployment rate data while being absent from the US unemployment rate data.
Posted by Jason Smith at 5:48 PM