Nick Edmonds read Kaldor's "The New Monetarism" (1970) a month ago and put up a very nice succinct post on endogenous money.

The first point is that, for Kaldor, the question over the exogeneity or endogeneity of money is all about the causal relationship between money and nominal GDP.  The new monetarists ... argued that there was a strong causal direction from changes in the money supply to changes in nominal GDP ...

Endogenous money in this context is a rejection of that causal direction.  Money being endogenous means that it is changes in nominal GDP that cause changes in money or, alternatively, that changes in both are caused by some other factor.

I've talked about causality in the information transfer framework before, and I won't rehash that discussion except to say causality goes in both directions.

As long as policy works to accommodate the demand for money, we might expect to see a perpetuation in the use of a particular medium - bank deposits, say - as the primary way of conducting exchange.  ...  But any stress on that relationship [between deposits and money] will simply mean that bank deposits will no longer function as money in the same way. The practice of settling accounts will adapt, so that we may need to revise our view of what money is.

One interpretation of this (I'm not claiming this as original) is that we might have a hierarchy of things that operate as "money":

In times of economic boom, these things are endogenously created (pulled into existence by [an entropic] force of economic necessity). The lower on the list, the more endogenous they are. When we are hit by an economic shock stress on the system causes these relationships to break, one by one. And one by one they stop being (endogenous) money. In the financial crisis of 2008, commercial paper stopped being endogenous money.

Additionally, a central bank attempting to conduct monetary policy by targeting e.g. M2 can stress the relationship between money and deposits causing it to behave differently (which Nick reminds us is similar to the Lucas critique argument).

This brings us to an interpretation of the NGDP-M0 path as representing a "typical" amount of endogenous money that is best measured relative to M0. Call it α M0 (implicitly defined by the gray path in the graph below). At times, the economy rises above this value (NGDP creating 'money' e.g. as deposits via loans, as well as other things being taken as money like commercial paper). When endogenous money is above the "typical" value α M0, there is a greater chance it will fall (the hierarchy of things that operate as money start to fall apart when their relationship is stressed). 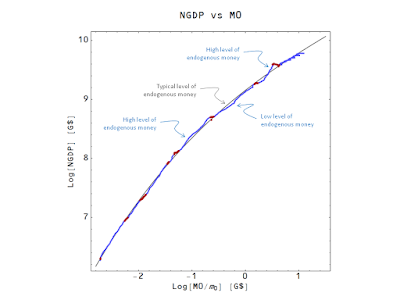 At a fundamental level, the theory of endogenous fluctuations is a theory of non-ideal information transfer -- a theory of deviations from the NGDP-M0 path in both directions (see the bottom of this post).
Posted by Jason Smith at 11:30 AM