The "quantity theory of labor" and dynamic equilibrium

One of the earliest models I looked at with the information equilibrium (IE) framework was the relationship $P : N \rightleftarrows L$ where $P$ is the price level, $N$ is nominal output, and $L$ is the level of employment. The relationship effectively captures Okun's law (i.e. changes in real GDP are related to changes in employment), and is a component of what I called the "quantity theory of labor" (and capital). The IE notation is shorthand for the equation:


with information transfer (IT) index (a free parameter) $k$. The price level is shown as the "detector" of information flow, and represents an abstract price in the information equilibrium framework. The solution to this differential equation is


I have previously looked at the core PCE price level, and noticed that it is well-described by a single shock centered at 1978.7 (I hypothesized this was related to a demographic shock of women entering the workforce). My question to myself was: what about $N/L$? The answer turned out to tell us that the abstract price $P$ isn't the measured by PCE (i.e. equation (2) is wrong), but rather something in information equilibrium with PCE. We also gain some new perspective on shocks.

So the basic dynamic equilibrium model gave us this description of the PCE price level:

The same procedure comes up with a similar result for $N/L$: 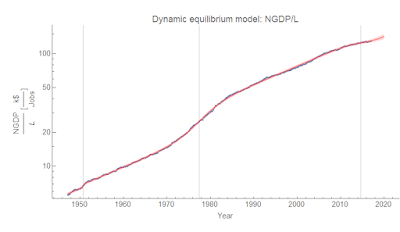 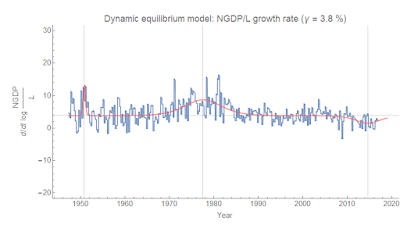 The biggest shock is centered at 1977.5, which is equal to the location of the shock to PCE inflation within the error. However, the first issue is that there is an additional shock associated with the aftermath of the great recession (centered at 2014.7). This shock is not obvious in the PCE data. This can be cleared up a bit by forcing the model to have an additional shock: 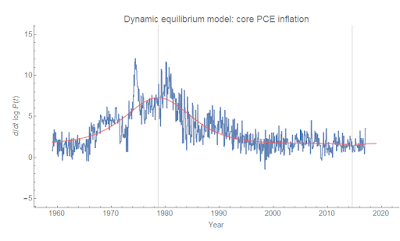 The model places a tiny shock (also centered at 2014.7 [2]) that is basically buried in the noise. Note that this shock may explain part of the low post-recession inflation and the more recent rise (the equilibrium inflation rate is 1.7%). More on this below in the forecasting section. In any case, this shows the small post-recession shock is not a serious issue.

What is a serious issue is that $\pi =$ 1.7% equilibrium inflation rate compared with the ratio $N/L$ growth rate of $\gamma =$ 3.8%. This tells us that the IE relationship $PCE : NGDP \rightleftarrows L$ is at best an approximate effective theory. However, it's not a serious issue that can't be dealt with via a simple fix; much like the interest rate model [1] instead of PCE being the abstract price $P$, we just assume PCE is in information equilibrium with the abstract price $P$:

What does this mean? Well, if we thought this model was accessing some fundamental "truth", we could say that the growth rate of $P$ (i.e. $\gamma$) is the "true" inflation rate that we only measure crudely with measures like PCE (actually CPI would be a slightly "better" measure with $c$ closer to 1).

But such a simple model is unlikely to be the best possible description of a macroeconomy, so it's probably best to take an agnostic "effective theory" approach. In that view, we just take the model above to be a decent approximation for some scope (e.g. average values over time scales of 10s of years, with errors for e.g. oil shocks).


The dynamic equilibrium results do lend themselves to (conditional [3]) forecasting, so here is the recent data for $N/L$ and core PCE (and their derivatives) along with a forecast through 2020: 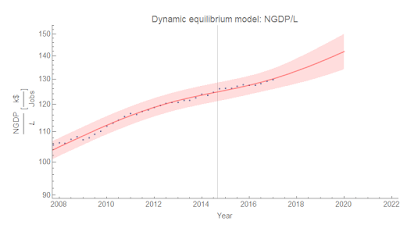 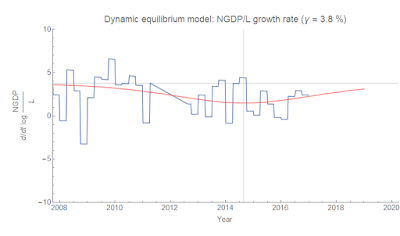 This forecast predicts growth will rise back towards the equilibrium growth rate of 3.8%. Note that this is the growth rate of $N/L$, not NGDP growth.

Here is PCE including the tiny post-recession shock: 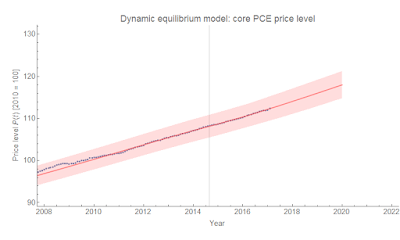 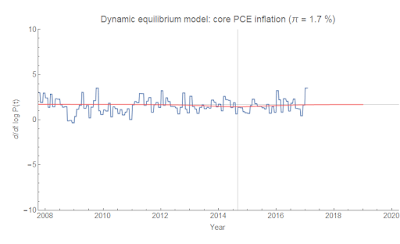 For completeness, here is the forecast without this shock:

[3] The condition is that no additional shock occurs during the forecast period.
Posted by Jason Smith at 3:00 PM