The Employment Situation data from BLS was released on FRED today (a.k.a. "Jobs Day") which includes the latest  unemployment rate and the "prime age" (25-54) labor force participation rate data among many other measures. I've emphasized those two particular measures since I've been tracking the performance of the Dynamic Information Equilibrium Model forecast since 2017. And now, almost three years later, they're as accurate as ever (black is the post-forecast data): 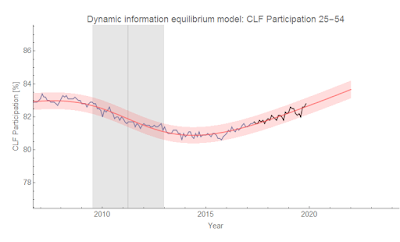 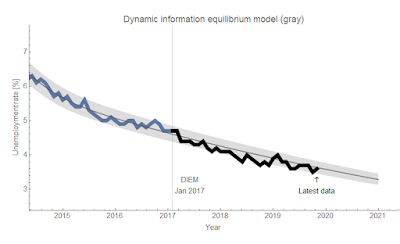 For a bit of context, here's a rogues' gallery of forecasts from the Federal Reserve Board of San Francisco (FRBSF), Ray Fair, Nobel laureate Paul Romer (a prediction from 2017 [1]), and Jan Hatzius (Goldman-Sachs) [click to enlarge]:

Additionally, PCE inflation data came out yesterday — it was also in line with the (very boring) DIEM forecast: 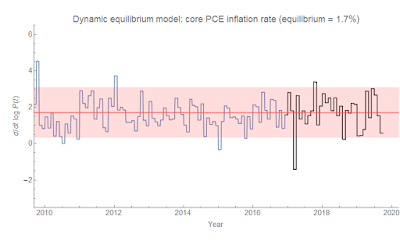 
[1] Also in the tweet with the unemployment prediction is a horribly wrong labor force participation forecast (the DIEM model of CIVPART was based on the dynamic equilibrium for the prime age participation rate forecast above). Click to enlarge: