Wage growth accelerates (and will until there's a recession)

I haven't compared the wage growth forecast to the Atlanta Fed's wage growth tracker data in awhile (last time was here). The recent data remains consistent with the forecast accelerating growth (increase in the growth rate): 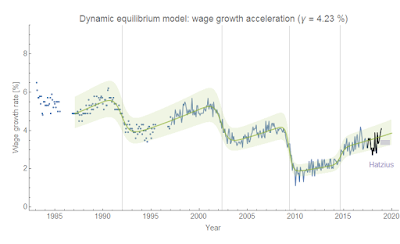 (The "Hatzius" marking is from this post comparing the highly paid Goldman Sach's chief economist Jan Hatzius with the dynamic information equilibrium models.)

This model comparing various labor market measures estimates that wage growth lags changes in JOLTS hires by 11 months, and changes in the unemployment rate by 6 months — that is to say a recession (defined as a spike in unemployment) precedes a drop in wage growth. An intuitive interpretation is that recessions "cut-off" wage growth.

What is also interesting is that wage growth appears to experience a negative shock when it reaches NGDP growth, and the latest data is beginning to rise above the NGDP model:

There is an intuitive explanation behind this effect: if average wages are growing faster than average growth, eventually it should start to degrade firm profitability. Over the next year we should get a good test of the usefulness of the dynamic information equilibrium framework and this hypothesis.
Posted by Jason Smith at 2:30 PM No comments:

The JOLTS data for November 2018 came out this morning, but there isn't much change in the assessment of the possibility of a future recession (per here). The openings data is still showing a negative deviation: 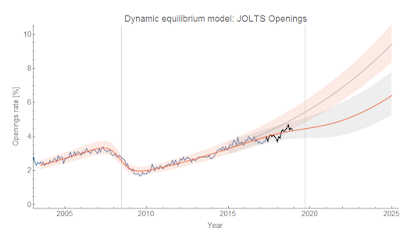 One thing that is a bit more clear is that the log-linear slope (i.e. the "dynamic equilibrium") of the JOLTS openings data for the past 18 24 months is definitely lower: 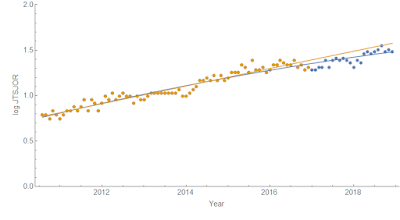 That's a linear fit to the (log of the) openings data since 2011 up through 18 24 months ago alongside a quadratic fit to the full range.

The hires data still doesn't show a deviation. Based on this model which puts hires as a leading indicator, we should continue to see the unemployment rate fall through April of 2019 (5 months from November 2018): 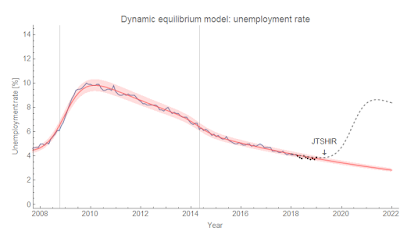 The gray dashed line is a counterfactual recession of average size and width (steepness) that reaches the edge of the confidence band in April of 2019 — it gives a rough estimate of the soonest a typical recession will show up as a rise in the unemployment rate based on the linked model that combines several dynamic equilibrium models of different measures into a single system. However, as noted above, openings might well be the leading indicator in the next recession (hires led the 2008 recession and appears to have led the 2014 mini-boom, but that's a very limited number of shocks to work with). The hires measure could also be off by a couple months based on estimated error.

Part of the reason I put these models out there is to make predictions — right or wrong. Being wrong tells us something just as valuable as being right!
Posted by Jason Smith at 6:30 PM No comments:

I'm just now back from vacation, so I missed the December unemployment situation data. The (seasonally adjusted) unemployment rate ticked up in December to pretty much exactly where the dynamic information equilibrium model expected it two years ago back in January 2017: 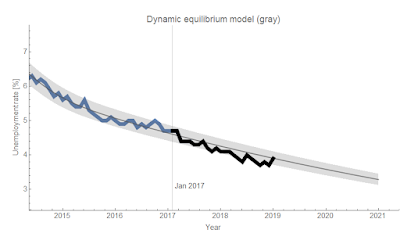 As was discussed in early December, the DIEM was much more successful than the overshooting FOMC and FRBSF forecasts (click to enlarge any graph):

What's even more interesting is that the more recent forecasts from the FOMC and FRBSF (vintage September 2018 and June 2018, respectively) are now undershooting the data while a comparable vintage forecast from the DIEM (April 2018, to compare with the CBO forecast) is pretty accurate:

It's as if the FOMC and FRBSF forecasts "over-learned" from their tendency to be too high as unemployment continued downwards but now are too low as the log-linear decline (in the DIEM) flattens out.

Here is the DIEM forecast of the unemployment rate for African Americans getting it right over the same two year period: 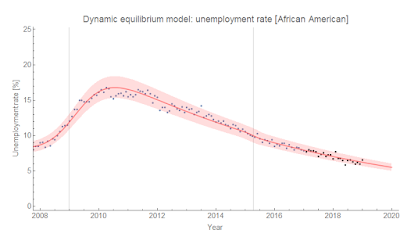 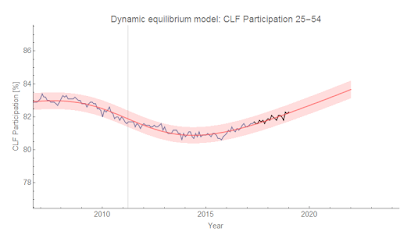