Is the credibility revolution credible?

Noah Smith made a stir with his claim that historians make theories without empirical backing — something I think is a bit of a category error. I mean even if historian's "theories" truly are "it happened in the past, so this can happen again", that the study of history gives us a sense of the available state space of human civilization, then that observation is such a small piece of the available state space as to carry zero probability on its own. You'd have to resort to some kind of historical anthropic principle that the kind of states humans have seen in the past are the more likely ones when you have a range of theoretical outcomes comparable to the string theory landscape [1]. But that claim is so dependent on its assumption it could not rise to the idea of a theory in empirical science.

For example, a common finding in the literature on education production is that children in smaller classes tend to do worse on standardized tests, even after controlling for demographic variables. This apparently perverse finding seems likely to be at least partly due to the fact that struggling children are often grouped into smaller classes.

It's not that they proved this empirically. There's no citation. It just "seems likely" to be "at least partly" the reason. Credibility revolution! Later they mention "State-by-cohort variation in school resources also appears unrelated to omitted factors such as family background" in a study from Card and Krueger. No citation. No empirical backing. Just "appears unrelated". Credibility revolution! It should be noted that this subject is one of the author's (Angrist) common research topics and has a paper that says smaller class sizes are better discussed below — Angrist could easily be biased in these rationalizations in defense of their own work. Credibility revolution!
There's another one of these "nah, it'll be fine" assurances that I'm not entirely sure is even correct:

... we would like students to have similar family backgrounds when they attend schools with grade enrollments of 35–39 and 41–45 [on either side of the 40 students per class cutoff]. One test of this assumption... is to estimate effects in an increasingly narrow range around the kink points; as the interval shrinks, the jump in class size stays the same or perhaps even grows, but the estimates should be subject to less and less omitted variables bias.

I wracked my brain for some time trying to think of a reason omitted variable bias would be reduced when comparing sets of schools with enrollments of 38-39 vs 41-42 as opposed to comparing sets of schools enrollments of 35-39 vs 41-45. They're still sets of different schools. By definition your omitted variables do not know about the 40 students per class cutoff, so should not have any particular behavior around this point. It just seems like your error bars get bigger due to using a subsample. Plus, the point where you have the most variation in your experimental design is in the change of class sizes from an average of ~ 40 to an average of ~ 20 in a school with an enrollment going from 40 to 41 meaning that individual students are having the most impact precisely at the point where you are trying to extract the biggest signal of your effect. See figure below. Omitted variable bias is increased at that point due to the additional weight of individual students in the sample! It could be things you wouldn't even think of because they apply to a single student — like an origami hobby or being struck by lightning.
The authors then (to their credit) cite Urqiola and Verhoogen (2009) showing the exact same method fails in a different case. However, they basically handwave away that it could apply to the former result based on what could only be called armchair sociology about the differences between Israel (the first paper from one of the authors of the "credibility revolution" article [Angrist]) and Chile (the 2009 paper).
After going through the various microeconomic studies, they go through macro, growth econ, and industrial organization where they tell us 1) the empirical turn hasn't really taken hold (the credibility revolution coming soon), and 2) if you lower your standards significantly you might be able to say a few recent papers have the right "spirit".
Conclusion
Angrist and Pischke (2010) is basically "here are some examples of economists doing randomized trials, identifying natural experiments, and pointing out confounding variables" but doesn't make a case where this is a causal factor behind improving empirical accuracy, building predictive models, or producing results that are replicable or generalizable. They don't make the case that the examples are representative. I mean it's a good thing that pointing out obvious flaws in research design is en vogue in econometrics, and increased use of data is generally good when the data is good. However I still read NBER working papers all the time that fail to identify confounding variables and instead read like a just-so story for why the instrumental variable or natural experiment is valid using non-empirical reasoning. Amateur sociology still abounds from journal articles to job market papers. The authors essentially try to convince us of a credibility revolution and the rise of empirical economics by pointing to examples — which is ironic because that is not exactly good research design. The only evidence they present is the increasing use of the "right words", but as we can see from the examples above you can use the right words and still have issues.
In the end, it doesn't seem anyone is pointing out the obvious confounding variable here — the widespread use of computers and access to the internet increased both the amount of data, the size of regressions, and the speed with which they could be processed [3] — could lead to a big increase in the number of empirical papers (figures borrowed from link below) without an increase in the rate of credibility among those results [4]. And don't get me started about the lack of a nexus between "empirical" and "credible" in the case of proprietary data or the funding sources of the people performing or promoting a study. 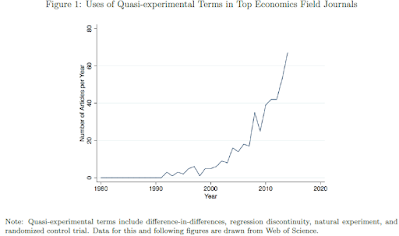 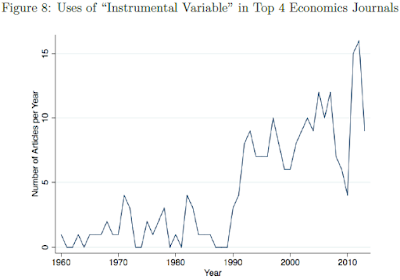 So is this evidence of a credibility revolution? Not really.
But per the original question, is this a counter to people saying that economics isn't empirically testable science? It depends.
I mean it's not an empirically testable science in the sense of physics or chemistry where you can run laboratory experiments that isolate individual effects. You can make predictions about measured quantities in economics that can be empirically validated, but that isn't what is being discussed here and for the most part does not seem to be done in any robust and accountable way. Some parts of econ (micro/econometrics) have some papers that have the appearance of empirical work, but 1) not all fields, and 2) there's still a lot of non-empirical rationalization going into e.g. justification of the instrumental variables.
I would say that economics is an evidentiary science — it utilizes empirical data and (hopefully) robust research design in some subfields, but the connective tissue of the discipline as a whole remains as always "thinking like an economist" which is a lot of narrative rationalization that can run the gamut from logical argument to armchair sociology to just-so stories used to justify the entire theory or simply an instrumental variable. Data does not decide all questions; data informs the narrative rationalization — the theory of the case built around the evidence.
A lot of the usefulness of looking at data in e.g. natural experiments is where they show no effect — or no possibility of a detectable effect. This can help us cut out the theories that are wrong or useless. Unfortunately, this has not led to a widespread reconsideration of e.g. the supply and demand framework being used in labor markets on topics from the minimum wage to immigration. If economics was truly an empirical science, the economic theory taught in Econ 101 would be dropped from the curriculum.
...
[1] I have more of a "history is part of the humanities" view, that the lessons are essentially more evidentially grounded lessons of fictional stories, fables, myths and legends — you learn about what it is to be a human and exist in human society, but it's not a theory of how humans and institutions behave (that's political science or psychology). A major useful aspect of history in our modern world is to counter nationalist myth-making that is destructive to democracy.
A metaphor I think is useful to extend is that if "the past is a foreign country", then historians write our travel guides. A travel guide is not a "theory" of another country but an aid to understanding other humans.
[2] A less snarky version of this is that the field finally developed a critical mass of economists who both had the training to use computers and could access digital data to perform regressions in a few minutes instead of hours or days — and therefore could have a lot more practice with empirical data and regressions — such that obvious bullshit no longer made the cut. Credibility revolution!
[3] The authors do actually try to dismiss this as a confounding variable, but end up just pointing out flawed studies existed in the 70s and 80s without showing that those flawed results depended on mainframe computers (or even used them). But I will add that programming a mainframe computer (batch processes done overnight with lots of time spent verifying the code lest an exception causes you to lose yet another day and possibly funding dollars spent on another run) does not yet get to the understanding generated by immediate feedback from running a regression on a personal computer.
[4] p-hacking and publication bias are pretty good examples of the possibility of a reverse effect on credibility from increased data and the ability to process it. A lot of these so called empirical papers could not have their results reproduced in e.g. this study.
Posted by Jason Smith at 8:43 PM No comments: