Nick Rowe wrote up a short interpretation of the AD/AS model (aggregate demand/aggregate supply) that he thinks captures some deep understanding in macroeconomics. I'd like to show how to understand Nick's understanding in terms of information equilibrium.

Nick Rowe: The AD/AS framework is useful for thinking about monetary exchange economies.

Nick reiterates the point at the end, which is where I will take issue with it. However, let's set up an AD/AS information equilibrium condition $\Pi : AD \rightleftarrows AS$ with information transfer index $k$ such that

where $\Pi$ is the price level. 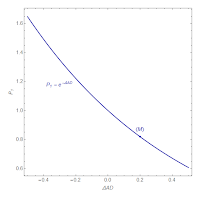 Or all together on one graph: 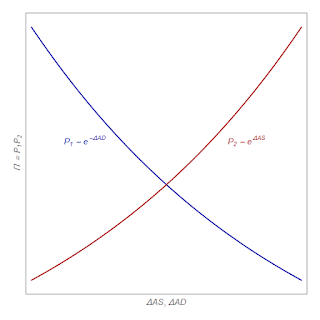 Nick Rowe: Then remember that exchange is voluntary, so that actual quantity traded is whichever is less: quantity demanded; or quantity supplied.

This is effectively the statement that information received can only be as great as information sent (at least on one direction, $I(AD) \geq I(AS)$), so that our equilibrium conditions (and therefore the curves above) become upper bounds:


This is non-ideal information transfer. Note that this also is where market failure enters (described in more detail here).

Nick Rowe: A good simple place to start would be with MV=PY for the AD curve ...

where we've defined $V \equiv P_{1}/k$. Note that this works empirically to leading order in an ensemble of random markets. For 1000 random markets, we have the model versus the data in the graph below: 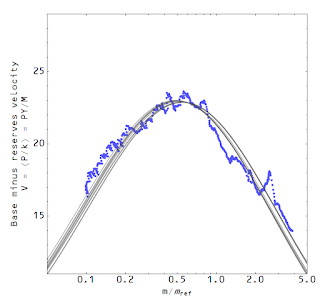 Nick Rowe: And if you don't start with money, monetary exchange, and AD and AS, you are doing macro wrong.

Now we come back to my issue. The thing is that inserting monetary exchange in the AD/AS diagram is effectively using mathematics, not behavioral relationships. In a sense, it's an identity (the chain rule or $M/M = 1$). And you can actually derive the aggregate supply/aggregate demand diagram above without resorting to money (from $\Pi : AD \rightleftarrows AS$ alone, by assuming one or the other responds slowly to changes in the other [1]).

Therefore asserting that you need to include money is making an assumption that the important and interesting macro dynamics are in the monetary exchanges $AD \rightleftarrows M$ and $M \rightleftarrows AS$. It is possible this is true, but that is something for empirical analysis, not theoretical fiat.

Indeed, interest rates can be described by a formally similar set of relationships

where $I$ is investment (GPDI). This works out empirically:

And in fact the IS-LM model can be derived from the monetary exchange AD/AS model above as an effective description at low inflation (where the monetary component becomes unobservable). Therefore Nick's assertion isn't as ironclad as he'd like to think. And there's some decent empirical evidence (see above) that the information equilibrium model captures the phenomena fairly well.

[1] That diagram looks like this (instead of $\langle M \rangle$ on the two curves, you have the ensemble averages of AD and AS): 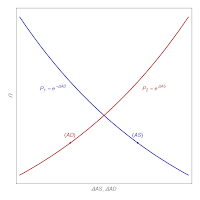