JOLTS data — and the twig crack that caused the avalanche?

Back from a long hiatus — things were crazy at the real job trying to get set up to work from home for a month or longer. Happy to report my family and I are doing well, and I hope everyone out there is staying healthy.

The drop in the JOLTS job openings rate I noted in the previous post (from February) has continued and it appears we're showing a definite deviation: 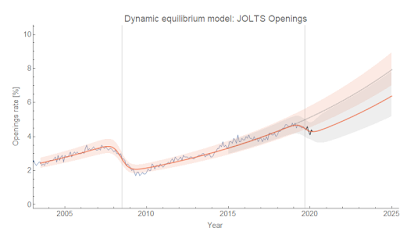 While you may be thinking "Yes, the COVID-19 shock", I should point out that this data is from February 2020 — and the deviation starts with data from December 2019. As I put it in a tweet from last month's data: What if there was a recession brewing and COVID-19 just triggered the market, like the old trope of a tree branch breaking causing an avalanche?

I saw that in the 2008 recession the JOLTS measures were some of the earlier indicators in the labor market with job openings being 4-6 months ahead of the shock to the unemployment rate. That was based on a single shock, but the hires data averages about 5 months lead using multiple shocks (in both directions) from the 1990s recession to today.

And last month's unemployment rate showed the first signs of a non-equilibrium shock with March 2020 data by either the Sahm rule or my "recession detection algorithm" threshold: 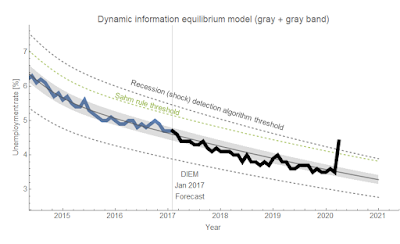 But in this view, the pandemic was just a coordinating signal. Often, these coordinating signals come from the Fed — an interest rate hike, lack of a cut, or even letting a financial institution fail — and coordination causes recessions (we all cut back on spending, we all sell our stocks, etc). Because the pandemic signal was so sudden and so unambiguous, we got a much sharper signal in the unemployment rate than usual and a bit of a compressed period between JOLTS and unemployment. For example, total separations is only barely registering a signal (it's there) while hires shows nothing yet (click to enlarge):

COVID-19 was the twig crack that caused an avalanche that was already building.

I've seen that some people think the recovery will be rapid. I doubt this because we are seeing a shock to the labor market — for example, initial claims spiked into the millions. A typical "surprise information shock" that evaporates has a distinct pattern:

It would look something like the red dashed line in this graph of S&P 500 data (while I show a non-equilibrium shock the size of the 2008 recession as a counterfactual recession path for reference): 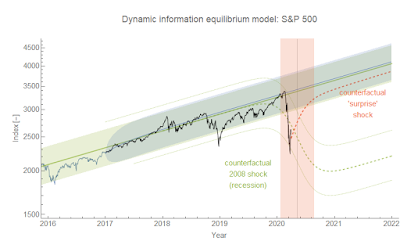 However, unemployment is already rising and it falls at basically the same rate over the entire history of the data. This "remarkable recovery regularity" became the basis for the dynamic information equilibrium model (first here, then here). This implies that we are unlikely to see a sudden shift back to low unemployment but rather something more like this: 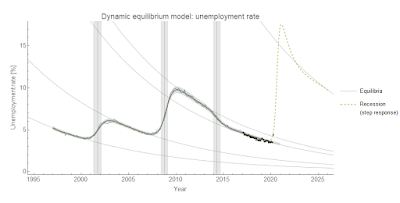 I added a step response (i.e. "ringing artifacts" or overshooting) to this qualitative non-equilibrium shock because the shock seems pretty sharp, however it is possible it won't happen as the step response has been gradually disappearing over time in US data. It's possible it won't be this big — though some people like James Bullard are are saying 30% is possible so it might be even bigger. But even the rise to 4.4% already in the data will take 3 years to get back to 3.5% along the dynamic equilibrium path.

It's going to be a long slog.

[1] In the past several decades, when wage growth exceeds the nominal GDP growth trend, there has generally been a recession.