Two phases of the 2008 housing crisis

I revisited an old post randomly, and it had a picture of housing starts that I realized had a connection to the more recent post on the housing crisis in terms of the Case-Shiller Housing Price Index. Recall that I showed the CS index as having a dynamic equilibrium in its growth rate remarkably similar to wage growth, but there were two shocks to the level of the CS index (that show up as spikes in the growth rate). First, here's the CS level: 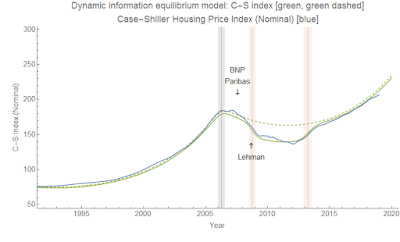 And here's the CS growth rate: 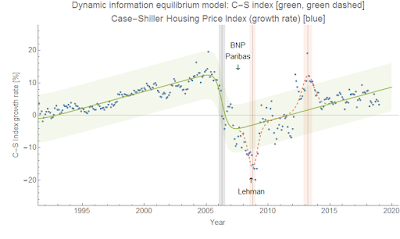 I color coded the extra shocks red. The dashed green path in the first graph shows effectively the counterfactual without the global financial crisis. These two extra shocks bookend the "unexplained" bit of housing starts in the old post I revisited: 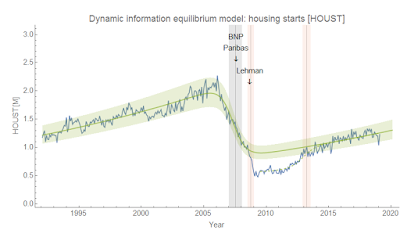 This all shows the 2008 housing crisis in the US as really a two-phase event. There's the large but relatively ordinary housing bust (the bust in housing starts in the mid-70s was actually bigger especially given the lower population at the time) that is followed up (and made worse) by the global financial crisis that starts around the Lehman bankruptcy.
Posted by Jason Smith at 6:00 AM