I have been following these discussions of "DSGE models", microfoundations and the Lucas Critique. My own take is: how could microfoundations possibly survive aggregation into a macroeconomic model as anything other than a coefficient? If they do, the resulting model is likely intractable!

Does this look intractable? Does it even look like more than two numbers (slope and intercept) survive to the macroeconomic scale? 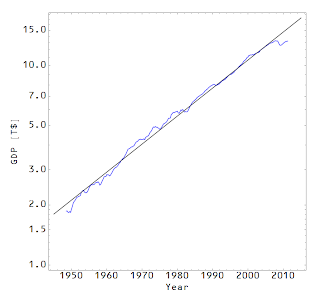 Snark aside, I'm motivated by the many cases in nature where the details of the microtheory end up as single numbers in the macrotheory: thermodynamics, quantum chromodynamics (there was a great letter published in a 1960s era Scientific American where there was a mysterious factor of three difference from the expected cross section), Galilieo's law, etc. Thermodynamics is an especially appropriate model as Boltzmann didn't know about atoms or how they worked (and in thermodynamics, it doesn't really matter), he just needed to know there were a lot (~ 10^23). Nature has a way of inventing new degrees of freedom (quarks give way to hadrons at low energy) or destroying the details (why Hydrogen forms a diatomic gas at STP based on its orbital structure and electrons being spin 1/2 simply becomes a heat capacity at constant volume of 5/2 vs 3/2 for e.g. Helium to good approximation). I imagine the details of why and how humans  decide what to spend their money on pretty much get subsumed into the slope and intercept above. However! This doesn't mean the details are unimportant -- many (most?) policy ideas in macroeconomics try to cross the boundary from micro to macro (tax incentives, health care economics) where economists try to figure out how changes to the microtheory affect the macrotheory. No one really knows how to do this very well -- in nature, the applicability of the degrees of freedom in the macrotheory usually breaks down before the applicability of the degrees of freedom in the microtheory really kick in. You go from hadrons to a mess and only then to quarks as you zoom in. In String Theory this is actually explicit -- with T-duality the physics at scale R is the same as the physics at scale α/R and neither can be small (in perturbation theory) at the same time.

Second, and on a more personal level (and speaking of string theory), from the outside, the whole DSGE model discussion reminds me of how String Theory is seen in physics: awesome models, awesome mathematics, little connection to experiment, pretty much intractable except with various simplifying assumptions, and kind of a big deal for a limited reason (DSGE has microfoundations and can look like an economy, string theory has something that looks like what we think quantum gravity should look like). I would hope that maybe this blog-paper could come along like Verlinde's paper on entropic gravity and say: maybe we don't need the details of the string theory to derive gravity ... maybe quantum gravity doesn't really even exist at a fundamental level because it is an entropic force much like diffusion that goes away when you look at a single molecule. We just need to know there are a lot of degrees of freedom and some basic concepts from the string theory microfoundations (emergent dimensions,  AdS/CFT correspondence). It seems something like inflation would go away  at a small enough scale ... but I don't want to prejudge anything and I as yet have no idea how inflation fits in the information transfer framework.

It is in that sense that I am going to try and describe the "emergent" theory of macroeconomics rather than build up a model from the ground up ... or another way: what would we say about macroeconomics if we didn't know about the existence of people in the same way Boltzmann didn't know about the existence of atoms? Imagine we are aliens measuring fluctuations in CO2 production from a distant observatory. There would be a story of various natural factors but a piece would be missing. It would grow exponentially (as Earth industrialized) and changes would happen (the "Great Recession" has reduced CO2 production by a significant amount, the "technology shock" of changing from coal to natural gas in the US has also reduced emissions). An alien comes along and proposes the idea of a "civilization" on that planet that does something faster than organisms generally grow through network effects so that maybe the individual components of this civilization interact and exchange information. The CO2 measurement would be a proxy for the information exchange -- and is essentially the price level in the economy in our model.
Posted by Jason Smith at 5:10 PM