Which is failing: ITM or QTM? 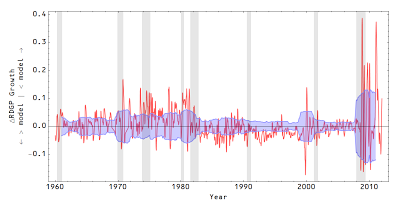 Here is the difference between the information transfer model and the empirical data for RGDP growth (in red) from the previous post. I also indicate recessions with gray bands and the standard deviation (over a 2 year interval centered on the year the value is indicated) as a blue band (the width of which is 2 sigma).

The question I want to explore is which (if any) model is failing here: the information transfer model (ITM) or the quantity theory of money (QTM). The particular model developed in the past several posts is a QTM in an ITM framework. The question we are asking here is analogous to the question of what is failing when we measure a deviation from g-2 for a muon: is it the quantum field framework or the standard model (which is implemented in a quantum field framework)?

The short answer to this is that since the QTM says the monetary base controls the price level in the long run,  neither have actually failed,  but let's explore further.

I took data from Robert Barro's text listed here and plotted it in black as inflation vs increase in monetary base (MB). In this case, the pure QTM (without the ITM) says that the increase in MB should be equal to inflation in the long run (it appears as a diagonal line in the graph). Scott Sumner points out that the QTM seems to break down at low levels of monetary base increase or inflation, but works better for large values of both. The blue points are the instantaneous values for the model calculations in the previous post. We can see the QTM in the ITM framework actually works rather well for the low inflation data points where supposedly the QTM breaks down. 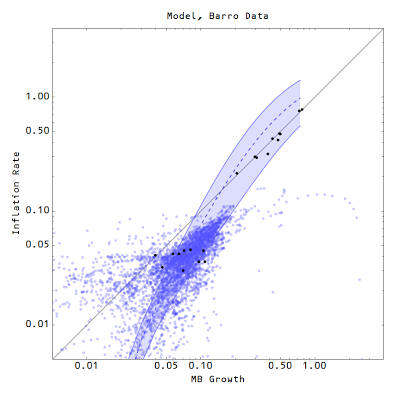 There is an overall bias above the pure QTM result for large inflation rates that may derive from the choice of normalization (the choice of the reference constants), but the result is pretty remarkable. Basically, the QTM + ITM appears to work even for low values of inflation as opposed to the pure QTM.

So the answer to my question in the title is: the pure QTM is failing (and we already knew that). The QTM + ITM model is doing as well, if not better than a pure QTM in the relatively low inflation environment of the post-war US economy.
Posted by Jason Smith at 9:32 PM