The emerging consensus (here, or in summary here) is that the Fed will/should "raise rates" after its December meeting. This is probably a bad idea for reasons that fall outside the realm (scope) of the information equilibrium model -- the IEM actually says it probably won't matter until reserves get down to pre-2008 levels.

There is one issue here: since the current rate is actually a ceiling (0.25%, here) and a floor (0%, here -- and my vote for most boring FRED graph), what does "raise rates" mean? Assuming it'll just be a 25 basis point increase [1], we have three options:

A. Raise the ceiling?

In this case, nothing should happen. Market rates are already below the ceiling, so it shouldn't make a big difference. However, instead of fluctuating between 0 and 0.25%, rates will fluctuate between 0 and 0.5% -- a slightly higher average.

B. Raise the floor to the ceiling?

This would return to pre-2008 where the Fed had a single target rate, so I kind of doubt they'd want to give up newly normalized flexibility (hence more likely that they take option C below). It would would probably be an "effective" 10 basis point increase because of the current effective Fed funds rate.

C. Raise the floor and the ceiling?

Now that we have these contingencies, I can make a prediction of what will happen to the monetary base (assuming the path of NGDP remains unchanged). To do the averages (e.g. between 0.25 and 0.5), I took the average of the logarithm (using the lowest observed Fed funds rate of 0.04 as a floor). That means: 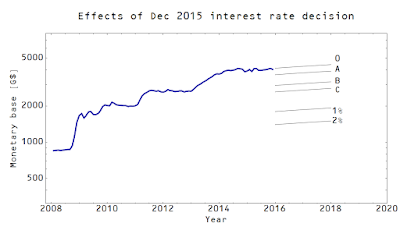 Note that if the monetary base goes to the levels corresponding to these rates (barring a sudden change in NGDP), it would represent a pretty remarkable success of the interest rate model functional form:

[1] There is the possibility of raising the ceiling by more than the floor. But I'll ignore that here.
Posted by Jason Smith at 12:22 PM