On IS-LM and scope

I have been working on a post about Olivier Blanchard's new way to teach IS-LM along with Nick Rowe's response to it. One thing that I've gotten bogged down with is an information equilibrium (IE) description of Rowe's objections (here's an IE version of the IS-LM model). I think I've put it together and this post is about working that out.

As I gather from Rowe's description, a recession is basically an excess demand for the medium of exchange with a corresponding deficit of demand for currently produced goods and services (by Walras' law). This is most easily represented as two markets sharing a relative price.


I'll call this the monetary model to give it a name. These lead to the traditional supply and demand diagrams in partial equilibrium: 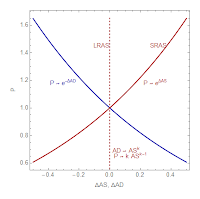 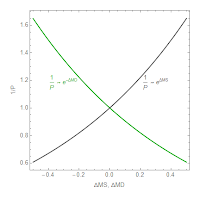 A positive shock (rightward shift) in the money demand curve (green) raises 1/P, lowering P (i.e. deflation). A positive shock to money supply will lower 1/P, raising P (i.e. inflation). The former results in a negative shock to aggregate demand for goods (consistent with the lower P with the markets being connected via Walras' law). This scenario is depicted below: 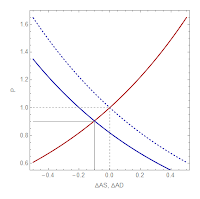 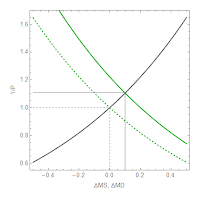 This seems fine. In general equilibrium we have (with IT index μ)


which means the price level falls with increasing money supply unless μ < 1. Additionally, we can say (with k being the IT index in the goods market)


which is the quantity theory of money with constant velocity. In fact, for k = 1/μ, the two markets are formally identical and we can say AD = MS and AS = MD (the second market is just a re-labeling of the first). Note the switch of supply and demand going from one market to the other. Aggregate demand is money supply and aggregate supply is money demand.


This is all well and good, but it brings up a big question: Why does Nick Rowe object to the IS-LM model?

Instead of the money market being a kind of dual to the goods market as described above, the IE IS-LM model inserts money as an intermediate market:


The front half becomes the bond market (interest rates). The basic mechanics of the IS-LM model can be thought of as a low inflation limit of the AD-AS model (as I show here), where k ≈ 1, meaning P ~ constant so that we must have μ ≈ 1 (i.e. k ≈ 1/μ). The difference seems to be in bringing in the interest rate though the (bond) market

However the bond market relationship holds across a long time scale, and over the long run, the general equilibrium solutions should hold such that:

In the other (monetary model), a fall in goods demand means a rise in money demand. This should mean a rise in the interest rate, but the model doesn't have interest rates. It does however mean inflation should fall (the "price of money" = 1/P rises).

This violates the ISLM model's low inflation scope (for the partial equilibrium analysis) -- and in the case of low inflation (μ ≈ 1), the monetary model effects are unobservable (if changes in money demand don't impact inflation, then who cares which way it moves relative to the demand for goods).

Here's a table that I think captures the results of this post: 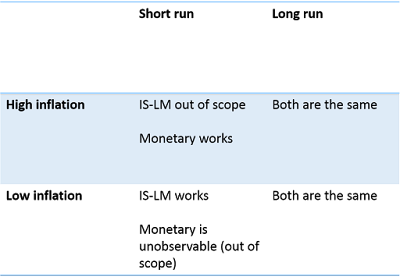