Counterfactuals and natural experiments: the US and EU

There seems to be some sort of new blog feud (see e.g. 1,2,3,4) about a David Beckworth graph that purports to show that 1) given the US and EU have engaged in "the same amount" of fiscal austerity, but different monetary policies and 2) since NGDP growth has been steady in the US and falling in the EU, we can conclude that 3) fiscal policy is ineffective.

Never mind that the market monetarist position is that different NGDP growth is the indicator of whether monetary policy is different in two countries; I want to see if we can make sense of the situation. [I'm not going to get into the argument about what the graph shows or if it is valid to look at year over year growth rates ... snoozefest!]

Let's use the US and the EU models built in the information transfer framework to look at some counterfactuals: what would have happened had monetary policy not been as aggressive? 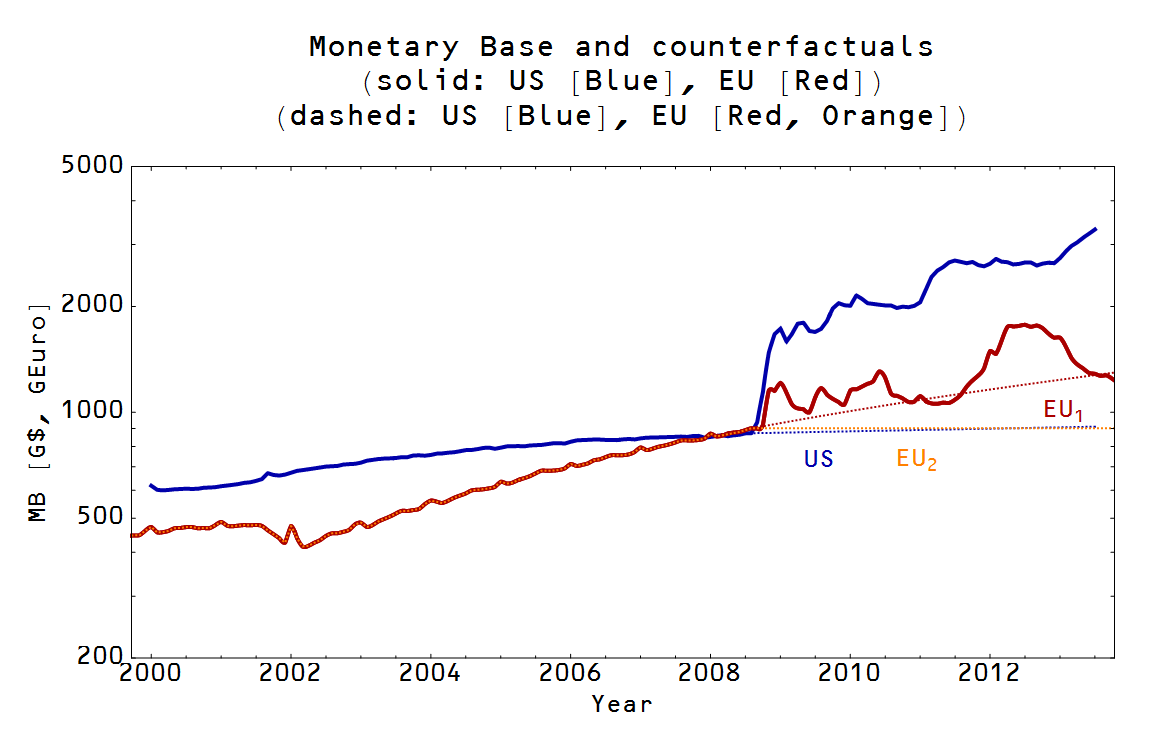 In the next graph I show the size of the monetary expansion (actual minus counterfactual) with solid lines (US in blue, EU in red and orange) alongside the effect on NGDP following this post. 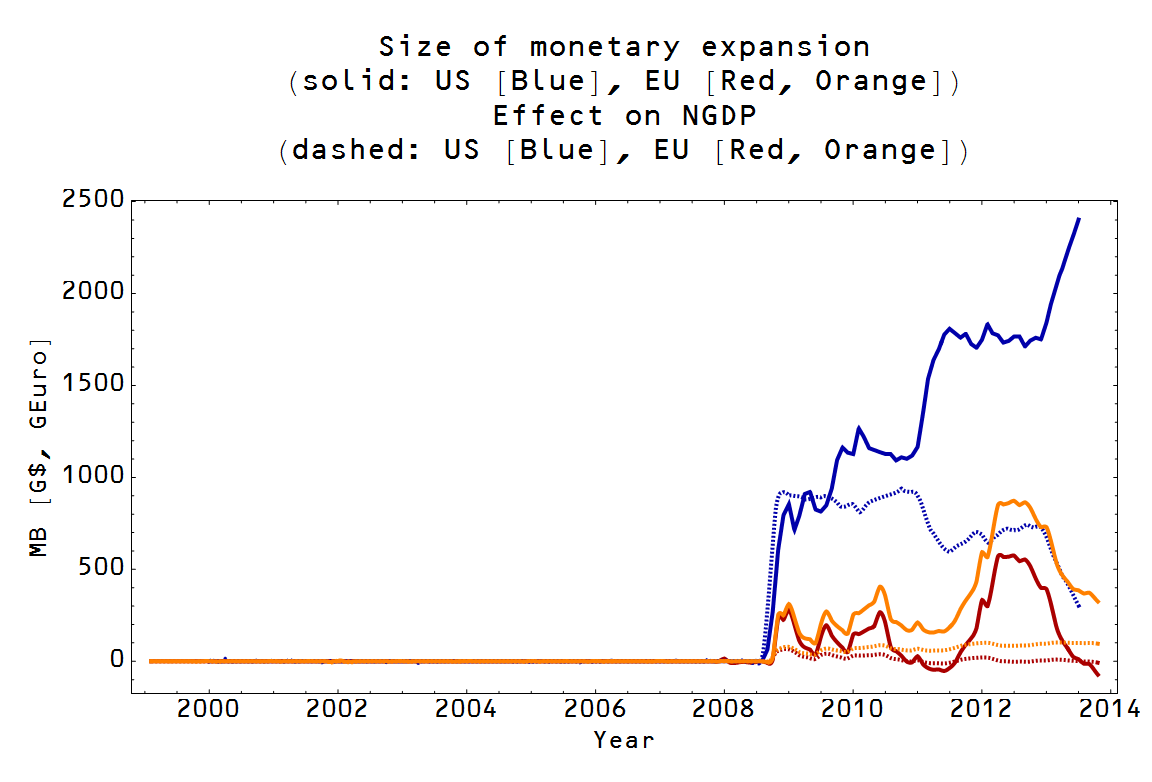 We can already see that at least initially, monetary expansion in the US was met by a comparable boost in NGDP, while in the EU there was only a weak response. In fact, we can see this more dramatically if we look at the cumulative "money multiplier" (the relative size of the cumulative integrals of the base expansion and the NGDP effect): 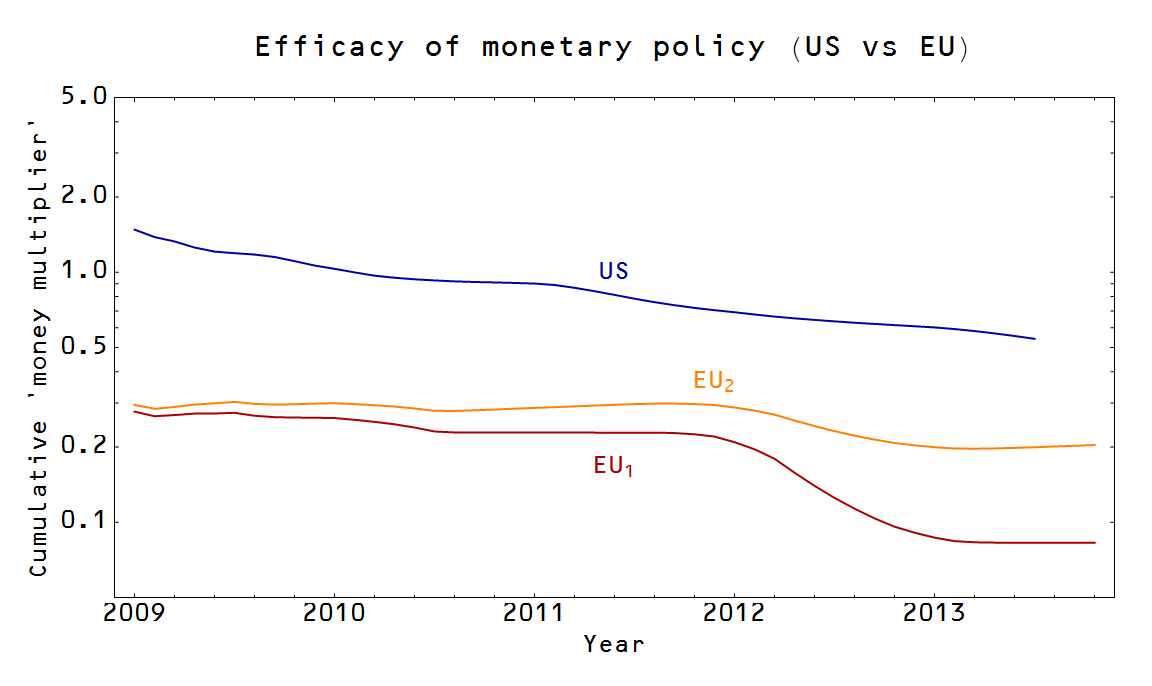 The US starts at 1.5, while the EU counterfactuals start at about 0.3. Both decrease from there. Of course the key thing to note (and the reason for why the difference between the US and EU) is that the EU monetary base is huge relative to the size of the EU economy -- it on the scale of Japan's. 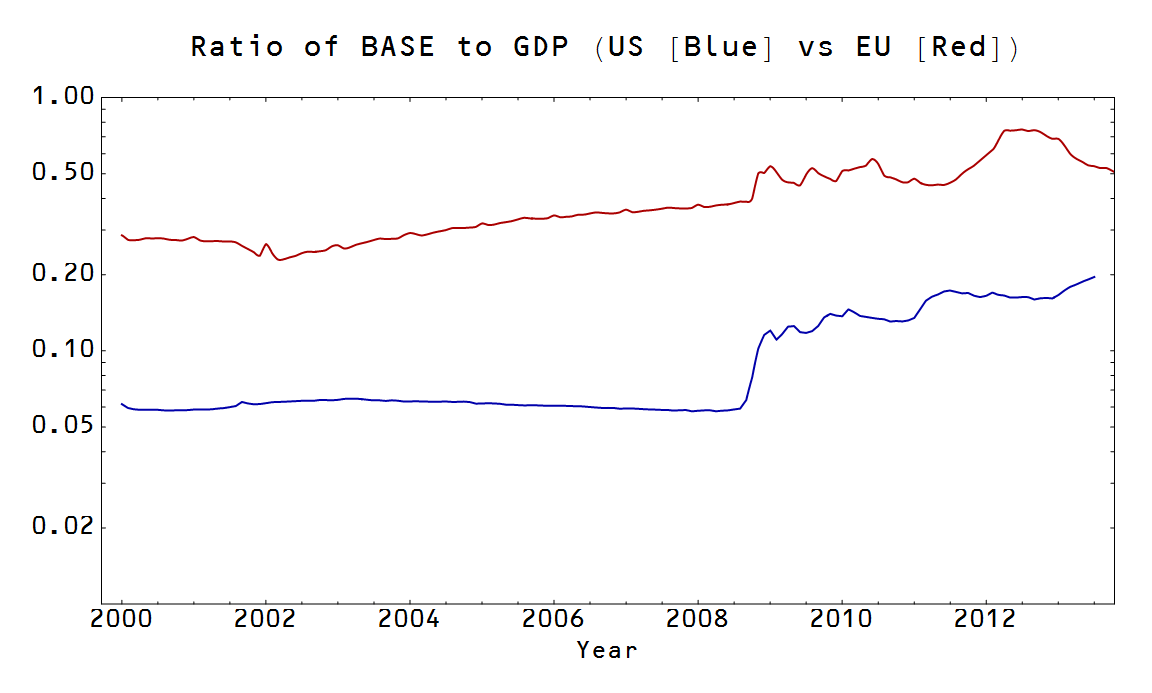 Monetary effects have saturated, but fiscal policy still could have a role. We are looking at the same amount of austerity in the presence of differentially effective monetary policies. Of course the EU is having a harder time. That means, in my view at least, the David Beckworth graph demonstrates the exact opposite conclusion he makes with it!

Now this isn't some sort of proof market monetarists are wrong -- they are using a different model. Loop quantum gravity doesn't disprove string theory. However, market monetarists are unable to show counterfactuals -- it's hard to figure out what would have happened differently with, say, different forward guidance in a particular country. Market monetarists rely instead on natural experiments (historical or concurrent) where seemingly every aspect of two situations is the same except the one you're trying to test. The example here is the assumption that the US and EU are the same except for monetary policy. The problem with this is that not every aspect of economics is understood. I've presented a perfectly good theory of macroeconomics that basically says the market monetarists may have neglected importance of the size of the monetary base. The US and the EU are not the same. A larger MB/NGDP ratio in the EU makes it different in more than one way from the US than just monetary policy since 2008. It may still be a natural experiment, but only for theory where MB/NGDP matters.