RGDP growth does not have unit root

The latest GDP numbers came out today and many people in the blogosphere are declaring the results are consistent with their priors; I will be no different, but I hope to add to the discussion by showing that RGDP growth does not have a unit root. This was inspired by a post by Scott Sumner.


What does unit root mean? Well, basically if a random process does not have a stationary trend, then it has a unit root and if it does, then it doesn't. That definition hinges rather precariously on knowing the trend, which is judged by a pretty squishy metric. I previously extracted a trend in a couple of different [1] ways [2] from the information transfer model (ITM) and it captures the empirical observation that RGDP growth has fallen over the post-war period. Various economic explanations are given for this fall: a productivity slowdown, or that GDP is hit by both supply and demand shocks with the former being more persistent. In the information transfer model, it follows from the diminishing marginal utility of monetary expansion. The most efficient way to increase economic growth in an economy with little money is to add money which allows the market to transfer more information from the demand to the supply. However, the bang for the (literal) buck tends to fall once there's enough money around which results in a slowly falling RGDP growth rate. There's no productivity slowdown or persistent supply shocks; your economy just ran out of low hanging fruit that could be grabbed by printing money.

And now, the unit root test!


Using the updated GDP data, I extracted the RGDP trend as I did in the links [1, 2] above. The RGDP growth data is shown in blue, the trend is shown as a dark blue line and the ITM de-trended data is in red: 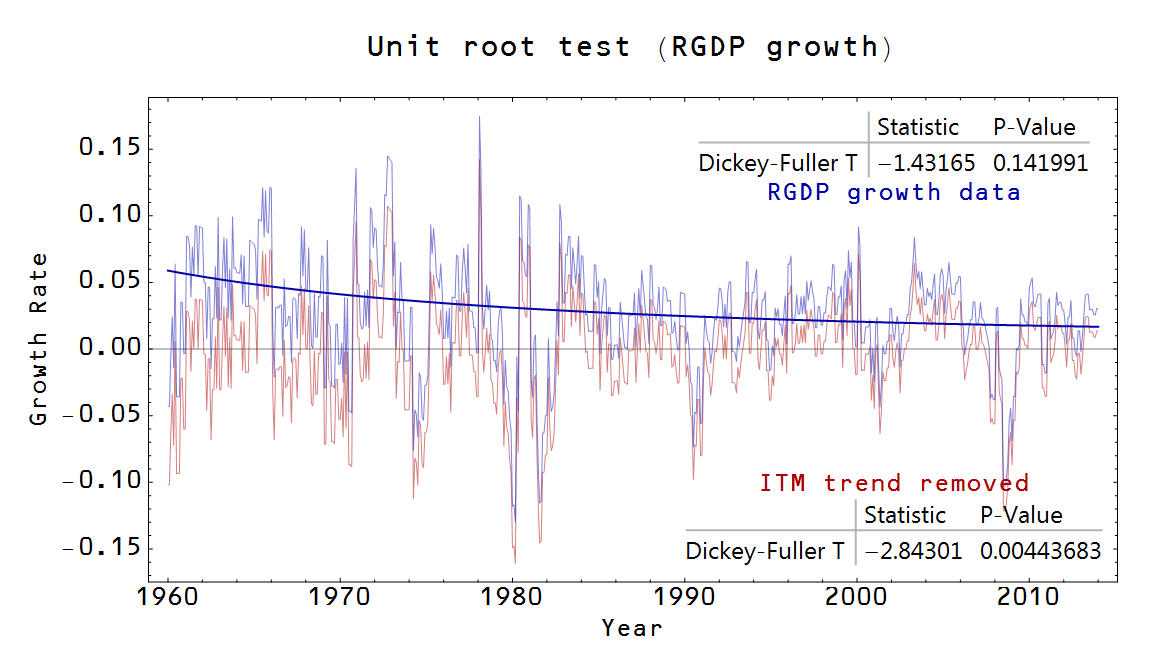 I performed a unit root test on the two data sets (a Dickey-Fuller test using annual averages) and the results are on the graph. The de-trended data rejects a unit root at the p = 0.01 level while the RGDP growth data appears to have a unit root. Essentially, RGDP growth is consistent with random fluctuations around the ITM trend in blue on the graph such that there is a tendency to return to the trend -- there is a "bounce back" after a recession. However, due to the fall in RGDP growth trend, the "bounce back" appears to get smaller and smaller over the post-war period.