Under the spell of the expectations fairy

Scott Sumner leaves my people of the concrete steppes with an ultimatum -- choose one of the following:

But only after he's surrounded our village with his model of how economies work.

"And we know [the statement 'dropping a trillion dollars out of a helicopter will create inflation'] is wrong because Japan did drop a trillion dollars out of a helicopter and it didn’t work.  They did an almost unbelievably large money-financed fiscal expansion over the past 20 years, and got DEFLATION ... Japan has increased its national debt to over 240% of GDP, and even about 140% in net terms (still among the largest in the developed world.)  And while doing so they increased their monetary base enormously."

The monetary base (MB) has nothing to do with inflation. There is literally no way the Japanese MB could have a consistent relationship wil the Japanese price level. The key variable in inflation is the monetary base minus central bank reserves (i.e. currency in circulation "M0") which has been relatively flat since 2000. You can see that M0 is a pretty good model of the price level in Japan: 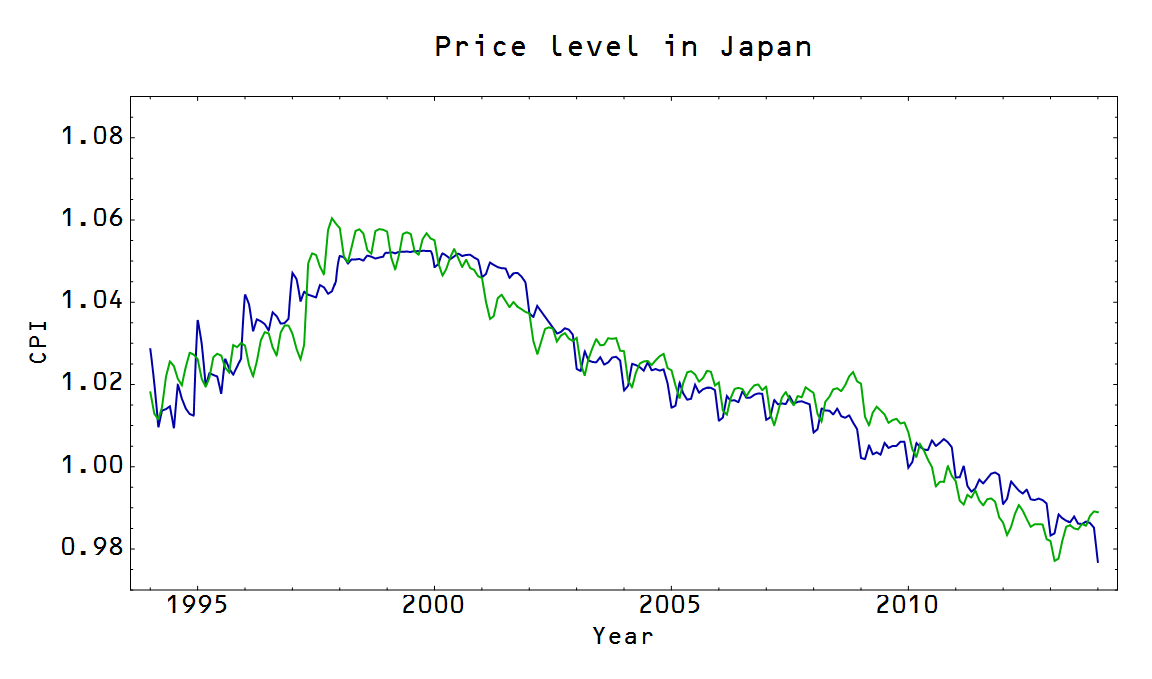 And we even get the deflation right. That comes from the fact that adding some Yen to the economy increases the medium of exchange, allowing for more information-bearing transactions to take place, but also redefines the unit of account [1] so each Yen carries less information. These two effects compete so that when log M0 is small relative to log NGDP, the medium of exchange increase dominates, but when log M0 is large relative to log NGDP, the shrinking unit of information becomes the main effect (resulting in deflation).


So what is the monetary base good for? Short term interest rates. So Sumner says something that is rather trivial in the information transfer model:

"The BOJ (wrongly) feared inflation, and thus began raising rates. With higher interest rates the bloated monetary base could cause high inflation. So at the same time the BOJ reduced the monetary base by 20%." 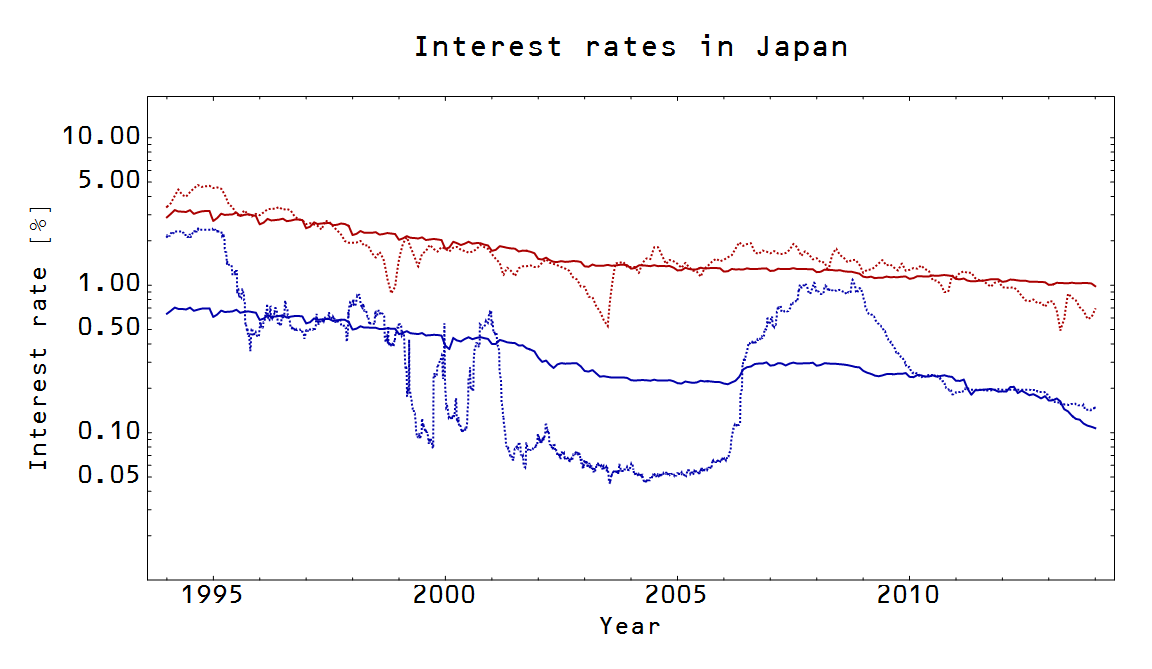 So in the case of Japan, we have no true Scotsman helicopter drops (printing currency to buy goods and services, not expanding reserves) so neither statements 1 nor 2 above apply to Japan.


The thing is, Japan pretty much disproves monetarism in general. There is no consistent relationship between measures of money and inflation (or the price level) that does not involve a changing definition of what you mean by 1 Yen. The market monetarism fix is to basically say that the changing definition problem is solved by "expectations". For Japan, that means the market expects Japan will suddenly cut not only the monetary base, but actual currency in circulation by 80% sometime in the near future (the price level has been roughly the same since the 1990s while the monetary base has more than doubled). This is, in a word, dumb.


However the information transfer model solves this changing definition problem in a different way. It says that each Yen has effectively lost 80% of its information carrying capacity since the 1990s, so adding Yen doesn't raise the price level as much as it once did.


Is an entire nation under the spell of an expectations fairy (a central bank they think won't allow inflation)?  Or is the currency less efficient at carrying information as it once was?

Which makes more sense to you?


[1] In thermodynamics terms, adding Yen both makes the economy larger (medium of exchange) and colder (unit of account). Maybe a good analogy is that money being added to the economy by the central bank is "cold" (not being used for anything), so it "cools down" the economy over the long run.

[2] This is intimately linked to the "inverted yield curve" as an indicator of recessions. 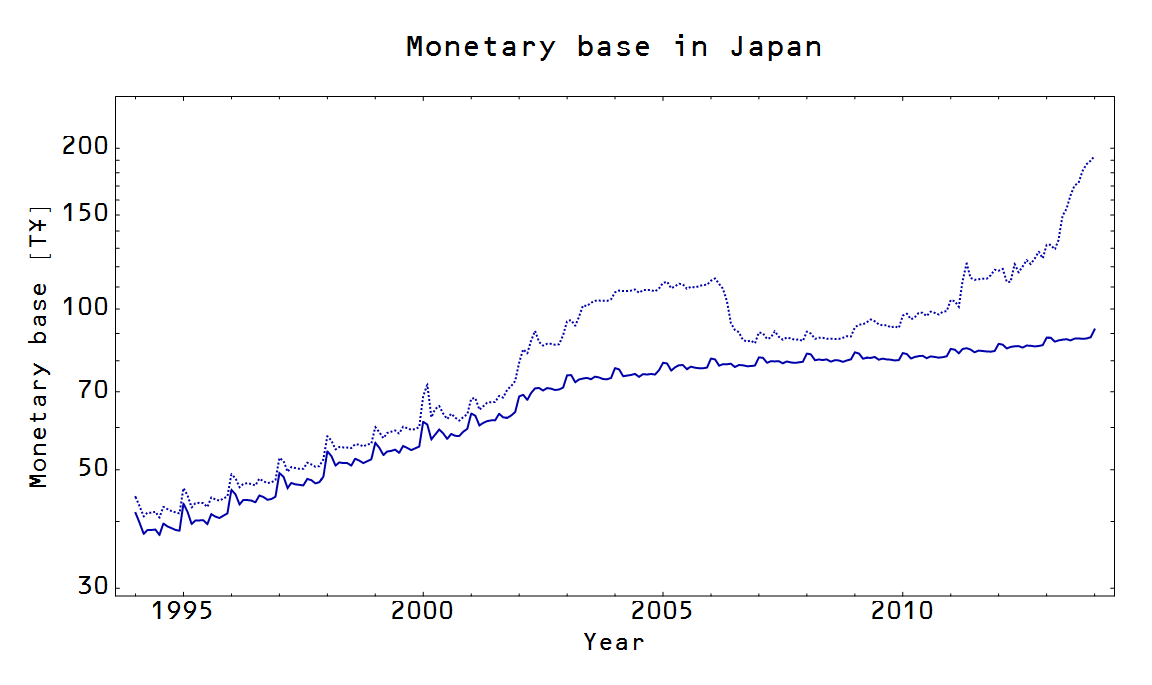