David Glasner is getting into complexity theory with his two recent posts. In the post from today he talks about traffic as a non-equilibrium complex system and quotes from a paper by Brian Arthur. In an effort to win Glasner over to an information theory view of economics, I'd like to show that a traffic system can be understood in a first order analysis with the information transfer model (or information equilibrium model). The power of the framework is demonstrated by the fact that I put this entire post together in a little over an hour on my lunch break.


Let me quote from the abstract of the paper by Fielitz and Borchardt [1] that formulates the information transfer model -- non-equilibrium complex systems is exactly what the model was designed to work with:

Information theory provides shortcuts which allow one to deal with complex systems. The basic idea one uses for this purpose is the maximum entropy principle developed by Jaynes. However, an extension of this maximum entropy principle to systems far from thermodynamic equilibrium or even to non-physical systems is problematic because it requires an adequate choice of constraints. In this paper we discuss a general concept of natural information equilibrium which does not require any choice of adequate constraints. It is, therefore, directly applicable to systems far from thermodynamic equilibrium and to non-physical systems/processes (e.g. biological processes and economical processes).

[Fielitz and Borchardt added the "economical" after learning of my blog and we periodically discuss how to properly interpret the model for economics. They have been a valuable resource in my research on this subject.]

We will set up the model as a set of distance slots (X) transferring information to a set of time (T) slots -- these become our process variables (see the preceding diagram). [Another way, X is in information equilibrium with T.] The other key ingredient is the "detector", a differential relationship between the process variables that detects information transfer [or changes in equilibrium], which we identify as the velocity:


where $\kappa$ is constant (if the slots in the diagram above don't change) that can be worked out from theory, but can also be taken from empirical observations. It's called the information transfer index. This equation represents an abstract diffusion process [1] and we have


And for $\kappa = 1/2$, you recover Fick's law of diffusion. However other relationships are allowed (sub- and super-diffusion) for different values of $\kappa$. It accounts for e.g. the number of lanes or the speed limits [or number of vehicles]. This is the equilibrium model of Arthur:

A typical model would acknowledge that at close separation from cars in front, cars lower their speed, and at wide separation they raise it. A given high density of traffic of N cars per mile would imply a certain average separation, and cars would slow or accelerate to a speed that corresponds. Trivially, an equilibrium speed emerges, and if we were restricting solutions to equilibrium that is all we would see.

However, if we look at non-ideal information transfer we have $I(T) \leq I(X)$ and equation (1) becomes

In this case the velocity falls below the ideal equilibrium price. Glasner continues his quote of Arthur

But in practice at high density, a non-equilibrium phenomenon occurs. Some car may slow down — its driver may lose concentration or get distracted — and this might cause cars behind to slow down.

Our model produces something akin to Milton Friedman's plucking model where there is a level given by the theory and then the "price" (velocity) falls below that level during recessions (traffic jams): 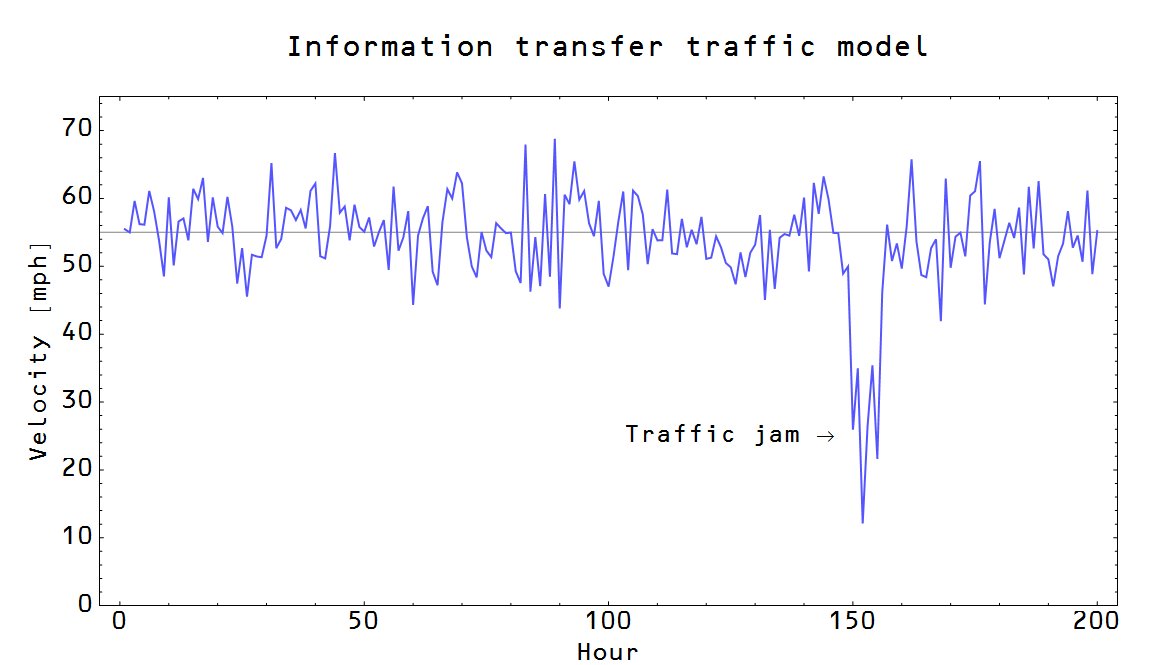 
This isn't a complete model -- it is more like a first order analysis. It allows you to extract trends and can be used to e.g. guide the development of a theory for how coordinations happen based on microfoundations like reaction times and following distances. In a sense, the information transfer model might be the macrofoundations necessary to study the microeconomic model.


For the information transfer model of economics, one just has to change $X$ to NGDP, $T$ to the monetary base, and $V$ to the price level. There's also an application to interest rates and employment. As a special aside, Okun's law drops out of this framework with just a few lines of algebra.


Also, the speed limit can coordinate the distribution of velocities -- much like the central bank can coordinate expectations. I'd also like to note that no matter what the speed limit is, the speed of the traffic may not reach that because there are too many cars. This may be an analogy for e.g. Japan, the US and the EU undershooting their inflation targets.