Scott Sumner has up a series of posts (here, here, here, here and here) that question the meaningfulness of the word 'recession' if, as the media (and OECD) says, Japan has entered a recession. In one of those posts, Sumner has two definitions of recession that show economic analysts use a variety of indicators to determine whether a recession has happened. Sumner advocates a view that stresses unemployment.

Changes in unemployment do seem to be a strong recession indicator in the US, but some of these are a bit weird if you think about them. For example the 1990s recession ends at an unemployment level that the 2000s recession reaches at its peak. That makes me think that absolute unemployment is not a reliable indicator.

In the information transfer model, unemployment appears to be the result of a spontaneous coordination that breaks the market mechanism. The rapid climbs in unemployment appear to be mass panic and require some sort of human behavior model that can't be explained by macroeconomic variables. The information transfer model, however, does appear to have a pretty solid definition of recession that even has an analogy in terms of avalanches. I look at what I called "nominal shocks" -- they are the difference between where NGDP is and where it 'should be' based on the change in the price level alone. The method is described here and I discuss the usefulness of the indicator in the case of low inflation here.


Japan has been experiencing outright deflation over the past couple decades ... which could make you mis-interpret falling NGDP (or very slow growth) as a recession. Using the method above, we can figure out that Japan has been experiencing an average 'nominal shock' of +0.96% since 1994. The economy has been 'growing' despite deflation [corrected]. Here is a graph of these nominal shocks with OECD recessions indicated in red: 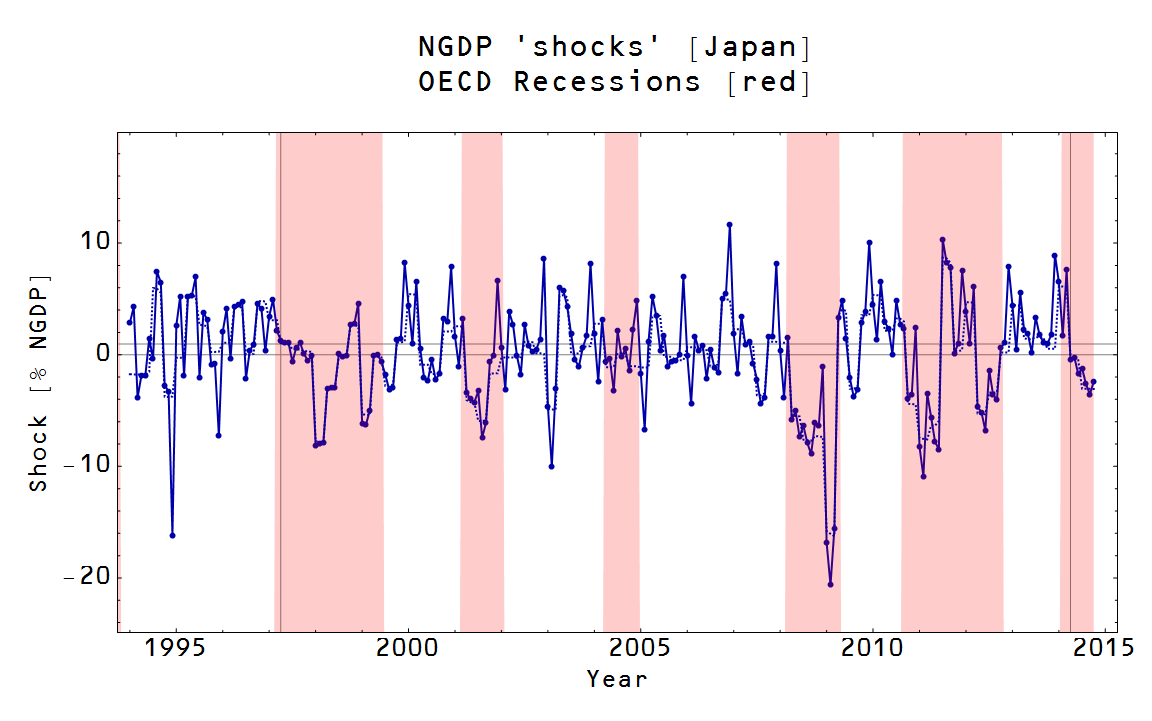 If you split up the second to last recession, you get evidence for the LA Times claim of four recessions since 2008 that Sumner ridicules in one of the linked posts above.

The recessions are all fairly obvious sustained negative deviations (or pairs of deviations) except the one that happens in 2004. In any case, there is a pretty solid case for 2014 to be a recession. If the ITM ruled economics, I'd throw out the 2004 recession and possibly split up the recession in 2011-2012: 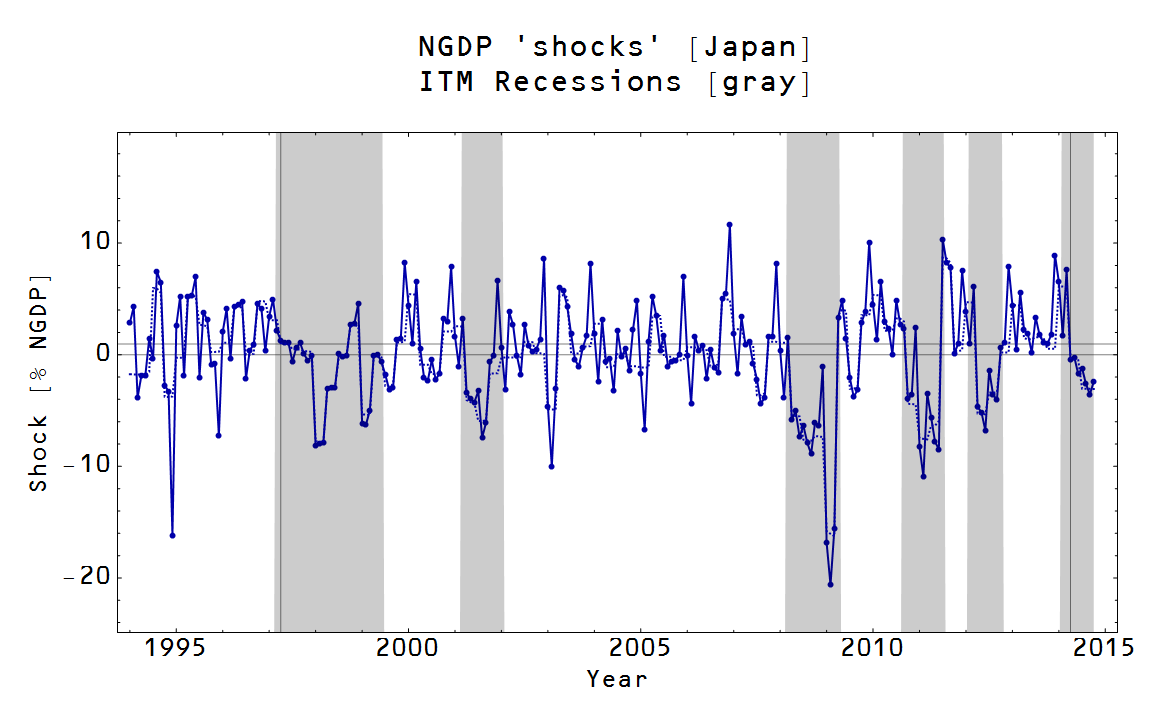 The other thing to note is that the two VAT increases (vertical lines in the previous two graphs) precede large negative shocks and associated recessions.

PS I did the fit to the Japanese price level after subtracting out the two big VAT increases that show up in the data and it looks pretty good: 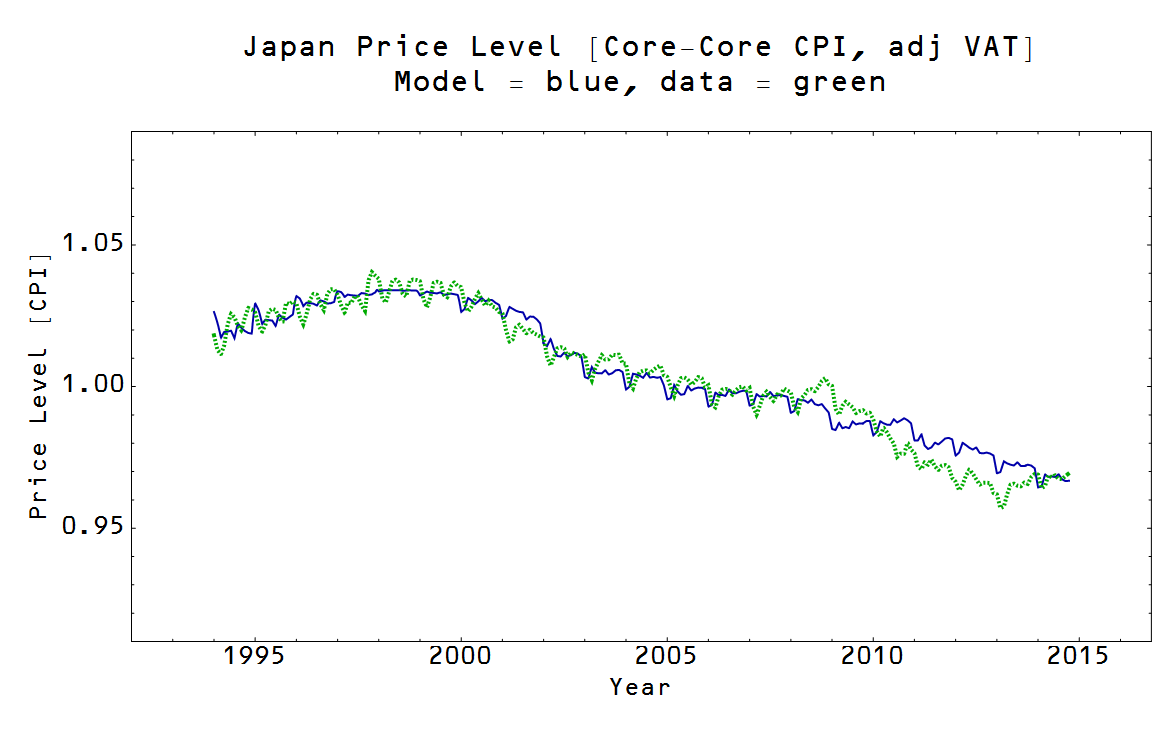