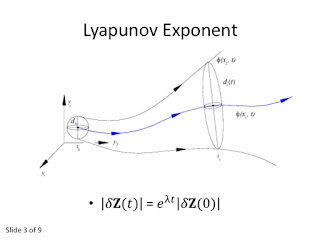 As some of you may know, I'm in the process of writing a paper with frequent commenter (and MD) Todd Zorick on applying the information equilibrium model to neuroscience -- in particular: can you distinguish different states of consciousness by different information transfer indices that characterize EEG data? It's been something of a slog, but one reviewer brought up the similarity of the approach with a "scale dependent Lyapunov exponent" [pdf].

You can consider this post a draft of a response to the reviewer (and Todd, feel free to use this as part of the response), but I thought it was interesting enough for everyone following the blog. Let's start with an information equilibrium relationship $A \rightleftarrows B$ between an information source $A$ and an information destination (receiver) $B$ (see the paper for more details on the steps of solving this differential equation):


If we have a constant information source (in economics, partial equilibrium where $A$ moves slowly with respect to $B$), we can say:


[Update 13 June 2016: As brought up in peer review, we should consider the $B$ to be some aggregation of a multi-dimensional space (in economics, individual transactions; in neuroscience, individual neuron voltages) because $\lambda$ measures the separation between two paths in that phase space.]

This is interesting for many reasons, not the least of which is that a positive $\lambda$ (and it is typically in the economics case) is associated with a chaotic system. Additionally, the Lyapunov dimension is directly related to the information dimension. (See the Wikipedia article linked above.)

I want to check this out in this context.