I got in an argument with an anonymous commenter on my previous post as is my wont. He (it is probably a he) made the claim that post-WWII inflation was due to relaxing price controls and had nothing to do with my information equilibrium monetary model where the lack of Fed independence and interest rate pegging (and the failure of the general equilibrium solution [GE] to fit the data) meant we might want to apply the accelerating inflation solution [AI]. The lack of Fed independence lasts from 1942 to 1951 (until the Treasury-Fed accord), therefore the AI solution should be restricted in scope to that time period. Before and after that time, the GE solutions apply (see here).

The price control model (the commenter refuses to believe it is a model) would apply from when the price controls went into place in 1943 to 1946 (per this paper by Paul Evans), with a model-dependent burst of inflation afterwards (1946-1948).

What is interesting is that you can see the impact of price controls on the AI solution: 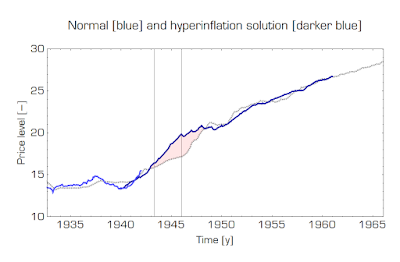 The AI solution seems to be valid from 1942 until the 1960s (at which point the GE solution that I usually show takes over). From 1943 to 1946, price level growth is about half what you'd expect from the AI solution of the information equilibrium model. When the controls turn off, you get a rise back up to where you'd expect from the AI solution. You can see this is a perturbation (a small model effect) to the accelerating inflation (hyperinflation) information equilibrium model (which covers a much longer period).

You can see this much clearer in the YoY CPI inflation data: 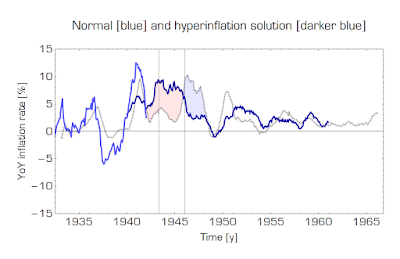 Economists (and my anonymous commenter) tend to treat the model above as two separate models, when in fact they can both be active at the same time. Dani Rodrik would say there is a theory for when the price controls are in effect and one when they're not. But what we really have is one theory that is in scope for the entire domain, and a second perturbation for when there are price controls.
Posted by Jason Smith at 11:42 PM