Macro is not like string theory, part III (Equations!)

I thought of another way to drive home the point that DSGE macro is not like string theory. It's essentially another way of representing the Venn diagram in that post, but this time in terms of equations. Basically, string theory is built up from a bunch of very successful pieces of physics in a natural way. A DSGE model is built of a bunch of pieces that haven't been empirically validated or worse appear to be wrong. I show the path integral with the Polyakov action for the simplest bosonic string theory (that I grabbed from here [pdf]), and compare it to the simple three-equation New Keynesian DSGE model (that I grabbed from here [pdf] because it showed the equations in compact form). I had to stop adding problems to the DSGE model (e.g. intertemporal optimization). 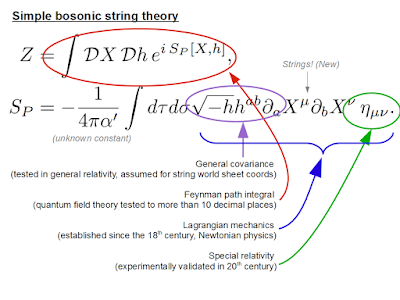 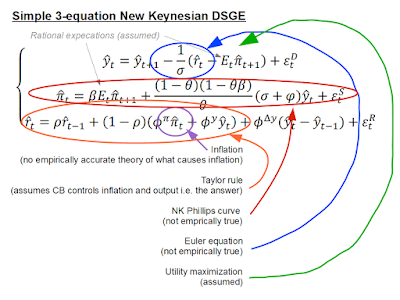 Let me call back to here:


To some degree, DSGE passes these tests [of being a framework]. Real Business Cycle (RBC) models as well as New Keynesian (NK) models can be expressed as DSGE models. But there is one test that DSGE fails (or at least fails to the best of my knowledge):

Theoretical frameworks organize well-established empirical and theoretical results. Using that framework allows your model to be consistent with all of that prior art.

The string theory model encapsulated prior empirical success; the DSGE model does not. Frameworks are a kind of shorthand for testing new theories against the existing empirical data. When the string theory Lagrangian uses special relativity or the path integral, it is going to be consistent with all the experimental tests of quantum mechanics and relativity.


PS I put together that NK DSGE model as a series of information equilibrium relationships (and showed that there are better, more empirically accurate versions).
Posted by Jason Smith at 10:39 AM