The economic state space: a mini-seminar

I thought I'd curate a mini-seminar of information equilibrium blog posts chosen from over the past two years that draw on a particular visualization of the economic state space: 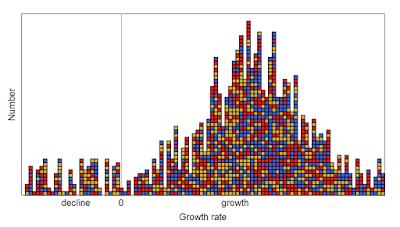 The picture above represents a histogram of different markets', individuals', households', firms', goods, or generic agents' "growth" states. For example, if firm X grows in revenue at 10% per year, then firm X gets a box at the 10% mark. But those boxes could well be wage growth or productivity growth for example.

If you need background on the basics of information equilibrium, here are some slides.

Here are six seven nine posts that expand on this idea of the economic state space (plus one link to a picture of a version using CPI components):

1. "A statistical equilibrium approach to the distribution of profit rates"

The movement of particular goods or labor growth states inside the distribution while the distribution itself stays relatively unchanged allows for nominal rigidity at for the aggregate economy, but without requiring individual wages/prices to be "sticky". This potentially resolves a conundrum because individual prices aren't empirically observed to be sticky, but aggregate stickiness is needed e.g. to make monetary policy have an effect on the economy.

We capture the concepts of the previous two posts in a single framework by defining a partition function (based on a maximum entropy distribution with constrained macroeconomic observables such as the existence of "economic growth"). This is used in the next post (#4).

4. An ensemble of labor markets

The picture at the top of this page gives a possible interpretation of national income accounting identities like Y = C + S + T + NX as more than just definitions.

6. Internal devaluation and the fluctuation theorem

The over-representation of the low/negative growth states has many implications for economics. In particular, although the information transfer approach is built on a generalized thermodynamics, the "econo-dyanmics" theory is very different from thermodynamics. The over-representation of low/negative growth states means "econo-dynamics" does not have a second law that entropy always increases. Thermodynamics has an exception for very small decreases in entropy (the fluctuation theorem), but econo-dynamics may have an even larger deviation that are at the heart of recessions.

The large deviations from the second law of thermodynamics may have their source in large scale coordination -- periods when agents behave in the same way such as a panic in a financial crisis or having the same reaction to a piece of economic news. Recessions could be viewed as a spontaneous fall in entropy. That is something that does not occur in physics or in many other maximum entropy approaches meaning that economics is a very different field of study.

An empirical look at a stable "statistical equilibrium" of price changes (price change state space) based on the MIT billion price project. The results support the economic state space picture.