With the new unemployment data out today, I thought I'd update the forecasts I've made. The original dynamic equilibrium model (which didn't use the logarithm) continues to fall in uncertainty (I put the two graphs together so you can toggle between them ‒ the new one is second/on the right):

I also added a deviation forecast (like the one above) to the improved dynamic equilibrium model. Since I didn't show this before, I thought I'd show several different versions choosing a different baseline year from 2016 to 2016.8 in steps of 0.1 (i.e. fit the data up to the baseline, then look at deviations afterwards). Thankfully, the result is relatively stable (it just becomes more uncertain if the baseline is later). The red curve is the baseline fit (with 90% confidence intervals as the red band). The gray line is the deviation fit (the horizontal line indicates the "onset" of a new shock); it shows 50-70-90 percent confidence bands. The deviation fit always uses data from 2015 to the present, it is just the baseline fit that causes these to be difference. 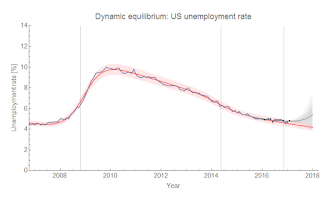 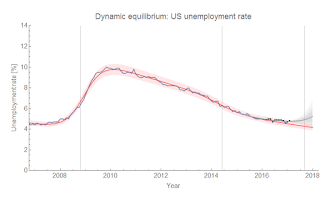 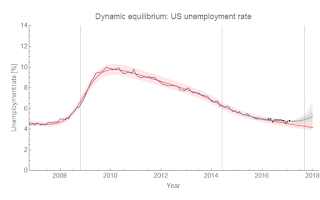 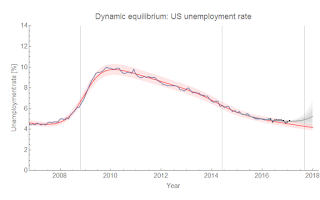 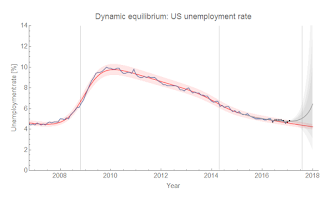 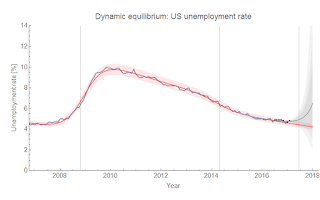 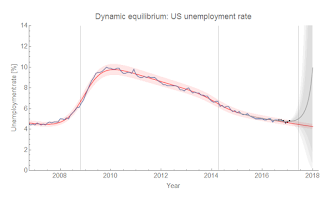 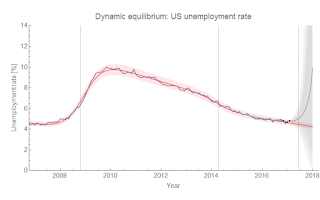 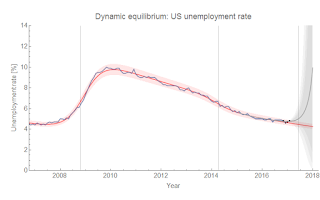 Nearly all select a mid-2017 center for the recession shock (consistent with the naive linear model at the top of the post). Of course, the unemployment rate has paused and then continued downward before. But as I noted in the post linked at the top of this post, these metastable states usually don't persist for very long.

Update: I'm going to use 2016.3 as the "official" version instead of updating multiple graphs. The three graphs 2016.1, 2016.2 and 2016.3 are stable, they all show the greatest separation from the counterfactual (red), and the last one has the least amount of data it is being projected from. Basically, if it's going to be wrong, then the 2016.3 will become wrong the fastest. Also, the graph of the data looks like it breaks between the straight line piece (blue) and the beginning of the curve (yellow) pretty well.