Weekly initial unemployment insurance claims (ICSA) were put up on FRED today, and so I thought I'd apply the dynamic information equilibrium model to the data. First, we need to divide by the size of the Civilian Labor Force (CLF) per the model $ICSA \rightleftarrows CLF$ in order to observe the ratio such that:

For the data since the mid-90s, there are two shocks $\sigma_{i}(t)$ corresponding to the early 2000s recession and "the Great Recession". The forecast, conditional on the absence of shocks (detectable e.g. via this algorithm), calls for a continued fall in the initial claims rate: 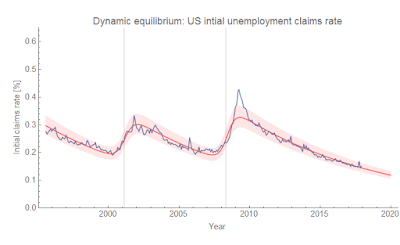 lol. I never did track this one until today (a year and a half later). It did fine — here's the original graph and a zoomed-in version: 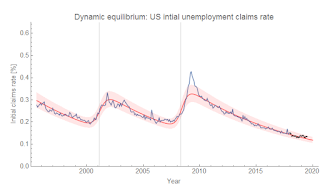 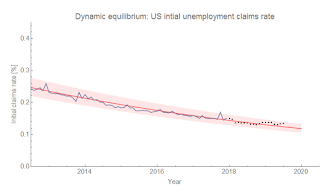