Wage growth (and finishing out bitcoin)

The Atlanta Fed wage growth data has been updated for June 2018, and is pretty much in line with the dynamic information equilibrium model I've been tracking since February: 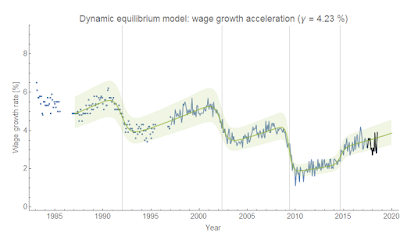 
Also, while not useful for forecasting, the bitcoin exchange rate model did provide a decent post hoc description of the data over the past several months but getting the average rate of decline a little high (using about −2.6/y, almost exactly 100 times the dynamic equilibrium depreciation rate of gold of −0.027/y when the actual empirical decline from the 18 December 2017 peak to the most recent 11 July 2018 measurement here was only −1.8/y):

It's possible there's another shock in the data [1] earlier this year, but as I said in this blog constantly adding shocks (even if they're really there) doesn't really validate the model. We'd need to validate the framework on other data and use that validity to motivate an unstable bitcoin exchange rate with tons of shocks.

Here's what happens when you include that shock: 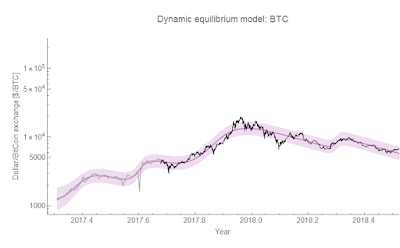 Note that in the "proper" frame (a log-linear transform that removes the dynamic equilibrium decline), the stair-step appearance (noted here and in my paper) is more obvious: