I saw JP Koning's post on bitcoin today, and the graph of the dollar/bitcoin exchange rate shows the tell-tale signs of a dynamic equilibrium. 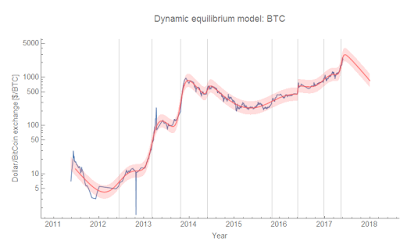 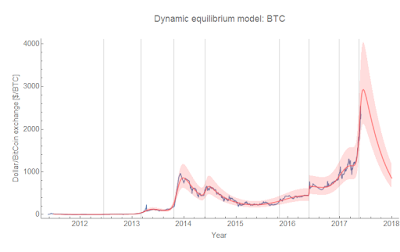 I wouldn't put too much stock in the exact timing of the collapse of the latest shock; it's fairly uncertain (as we can see from the graphs of the unemployment rate forecast). But it it's correct, then I'll totally take credit. Just kidding.

The interesting thing is that the dynamic equilibrium itself is a fractional decrease of −2.6/y (i.e. bitcoin loses more than half its value over the course of a year). This makes it similar to gold, but on a much faster time scale (gold is −0.027/y). That is to say, you can think of bitcoin as a time lapse picture of gold; what happens to gold over 100 years happens to bitcoin in a year.

I found that absolutely fascinating.

What does this mean for the future? Well, as long as positive shocks keep coming that are big enough and/or frequent enough, the value of bitcoin never has to go to zero. Estimating using a Poisson process with the current shocks, we have a time scale of 1.4 years (inter-shock period) which may well be sufficient given the size of the shocks already visible in the data (I want to analyze this further).
Posted by Jason Smith at 9:31 PM