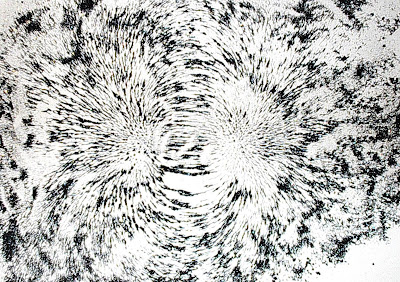 Money is a proxy for our human behaviors in the economic sphere. It's like the iron filings conforming to the magnetic fields, or the smoke in a wind tunnel test. It's not doing anything; we're doing things.

Let me back this up with a few aspects of the information transfer model.

First, it is basically a mathematical identity to insert money that mediates transactions into an information equilibrium (definition) condition. If you have A ⇄ B then A ⇄ M ⇄ B is just a chain rule and use of M/M = 1 away.

And finally, what about those high inflation cases? In those cases we have empirical evidence that money is tied to inflation, so how can you say it doesn't matter? Well if we think of money M as a factor of production (along with labor L and other factors) we have

where P is the price level. If money grows at a rate μ, and labor at a rate λ, then we have

If m is large and π is large [1], we can approximate the equation with just

which is basically the quantity theory of money. That's a relatively trivial role for money, however. And empirically, a trivial relationship is what we see for high inflation (over 10%).

For most modern economies, inflation dynamics are more likely demographic (see here or here) or due to other shocks (e.g. oil). Basically, that means the other terms in Eq. (2) are more important than the money term.

Overall, we have a series of trivial (math identity, quantity theory) or non-causal ("iron filings") relationships between money and macroeconomics. In most of the policy-relevant scenarios (recessions, modern moderate inflation economies), money doesn't really matter [2].

This is mostly for commenter Shocker below, but I think this post has been generally misinterpreted to mean we don't need money at all. My thesis is that we don't need money to explain modern moderate inflation economies or to implement economic policy. Only in trivial scenarios (e.g. high inflation, or no money at all) does it have an impact. Graphically: 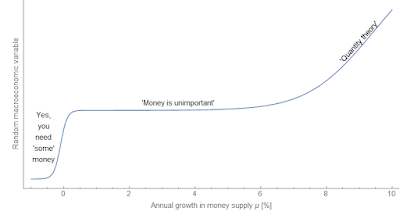 This is to say that for policy relevant scenarios in modern moderate inflation economies, for random macroeconomic variable R and money supply M:

[1] If π is small, then we must have a large cancellation.