In a conversation with Steve Roth, I recalled a paper I'd read a long time ago about wealth distribution:

We introduce a simple model of economy, where the time evolution is described by an equation capturing both exchange between individuals and random speculative trading, in such a way that the fundamental symmetry of the economy under an arbitrary change of monetary units is insured.

That's how econophysicists Bouchaud and Mezard open their abstract. Their approach is a good example of an effective field theory approach (write down the simplest equation that obeys the symmetries of the system). But interestingly, the symmetry they chose is exactly the same scale invariance that leads to the information equilibrium condition (see here or here). I hadn't payed much attention to this line before, but now it has more significance for me. The scale invariance is also related to money: money is anything that helps the scale invariance hold.

As a side note, you can also look at wealth and income as representing a dynamic information equilibrium subject to shocks.

The equation Bouchaud and Mezard write down simply couples (creates a nexus between) wealth of each agent and some field that exhibits Brownian motion with drift (i.e. a stock market). It also couples the wealth of agents to each other (i.e. exchange): 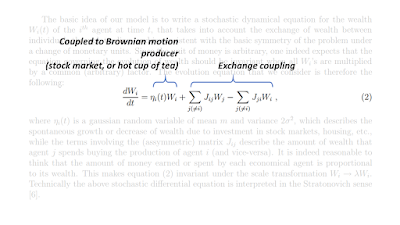 As you can see, taking W → α W leaves this equation unchanged.

This scale invariance is probably what allows their model to generate wealth distributions with Pareto (power law) tails.
Posted by Jason Smith at 1:00 PM