Ray Fair has put up the past forecasts of the unemployment rate alongside actual data on his website (which is laudable!), but they're shown as a table which is hard to read. I've put them graphically in context of the Dynamic Information Equilibrium Model (DIEM) forecast from January 2017: 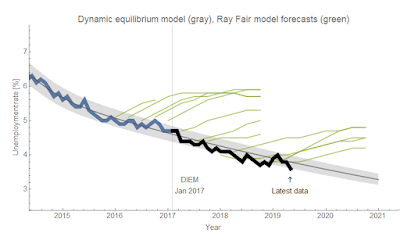 The context of my tweet about it was that I saw several people discussing Ray Fair's election model (which isn't very good), and wanted to add that his macro model wasn't very good either.

Also on Twitter (follow me @infotranecon!), I posted a couple of graphs of the S&P 500 and interest rates spreads yesterday (after the big fall in the market) which I haven't updated in awhile on the blog (here, here) ... 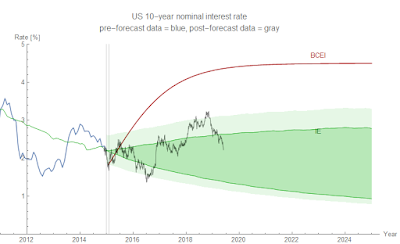 Also, here's a longer run of the S&P 500 showing the previous shocks and overlays the early 2000s recession on the current correlated deviation: 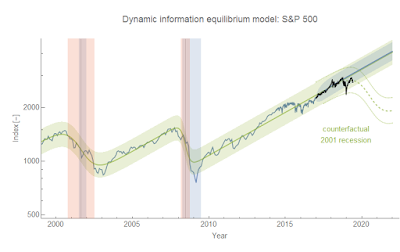 Red bands are the non-equilibrium shocks to the S&P 500. The blue-gray bands are the NBER recessions. The green is the DIEM with in the no-shock counterfactual scenario, while the dashed lines show a counterfactual shock of equivalent size to the early 2000s recession. The blue band shows the AR process error band used to project from the projection data point — which by now matches up with the green model error band (see the discussion in the footnote here for more about this).

Also on Twitter, I found out economist Claudia Sahm had been looking at the unemployment rate as a good indicator of recession for automatic stabilizers and had set up a threshold of about δu ~ 0.5 percentage point. I had put together a "recession detection algorithm" two years ago that used a threshold of δlog u ~ 0.17 (because the DIEM works in log space). Here's what those two thresholds look like on the unemployment rate forecast at the top of this post: 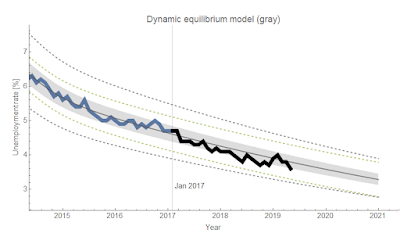