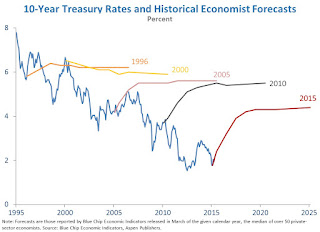 The decline [in long term interest rates] has come largely as a surprise. Financial markets and professional forecasters alike consistently failed to predict the secular shift, focusing too much on cyclical factors.

The above graph and quote are from this blog post by Obstfeld and Tesar (H/T John Cochrane) from July of this year.

With the exception of 2005 (which is when the Fed embarked on its tightening before [1] the great recession) where the prediction is uncertain, the IE model does a much better job of forecasting 10-year nominal interest rates in the far future. The bands in the following are the 1-sigma errors (68% confidence limits).


In this case, the IE model is a bit low in the near term, but better in the long term -- the opposite of the BCEI predictions. 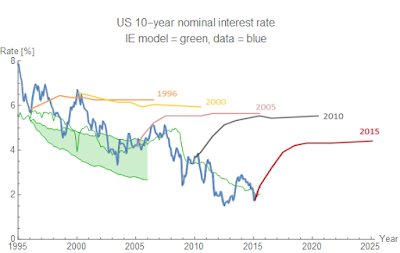 
In this case, I used 1999 as the prediction year instead of 2000 because the spike in base money due to fears of the 1999/2000 transition throws the model off. Even this does better than the (March of) 2000 BCEI predictions. 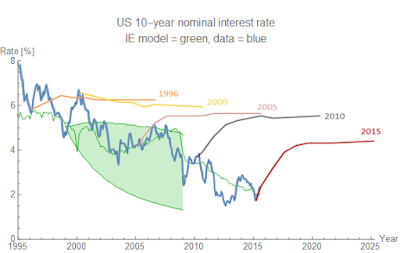 
This is the aforementioned case where the IE model becomes uncertain of the path of future rates and the Fed guides the economy between the high (initially) and low end (after the crisis) of the prediction bands. 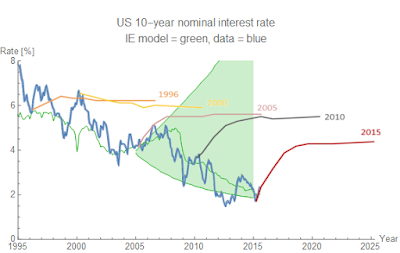 In this one, the IE model is spot on and far better than the BCEI prediction. 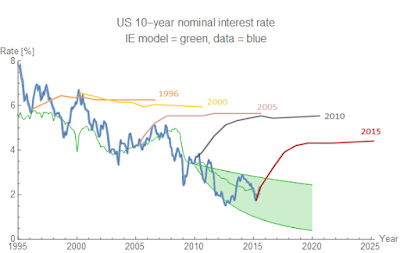 
We don't have the data yet, but I'd hazard a guess that the IE model predictions will be better than the BCEI predictions. If the Fed goes through with its projected short term rate increase in September-ish time period, it could impact this projection, but only if the Fed unwinds a large fraction of the QE in the short term. 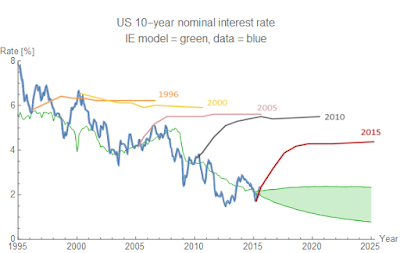 
The information equilibrium model for interest rates is described here and here. In the notation I've used (described at the second link), we have the model (r → p) : N → M where N is NGDP, M is base money (minus reserves), r is the interest rate and p is the 'price of money'. In words, that model reads:

You can have a look at the model here (with fit parameters):


[1] I wanted to put "precipitating" instead of "before" because of some other considerations of the IE model, but went with the more neutral version.
Posted by Jason Smith at 5:00 PM