Scott Sumner writes "higher interest rates are inflationary, as they raise velocity". Is this true? Generally? Is the mechanism true?

I had forgotten exactly how useful the log-linearized "DSGE form" of the information equilibrium model was to answer this kind of question. Ubiquitous caveat: this is a model-dependent result. The conclusions are true assuming the information equilibrium model (and my math is right). Anyway, here's are the (relevant) equations from this post (and ignore the difference between monetary base and monetary base minus reserves for right now):


Monetary expansion lowers interest rates if it is larger than the nominal shocks. Note that when $\kappa \simeq 1$, we also have

i.e. NGDP growth is mostly due to nominal shocks. You can see this point alongside some graphs of the nominal shocks here (also shown below). 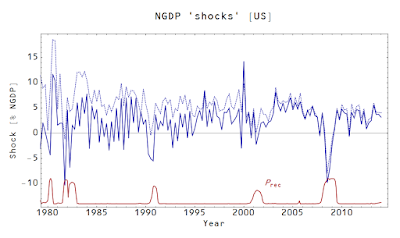 So the general picture of the US should show rising interest rates and price level, the latter of which causes $\kappa$ to rise (since $\kappa$ goes as log M/log N, the denominator reaches a point of slower growth before the numerator), leading to a turn-over and falling interest rates and a flattening of the price level. This is precisely the set of effects described here.

Update 8/18/2015: Updated summary with some economic language from the link at the very end.
Posted by Jason Smith at 4:00 PM