I've been playing around with the time series forecasting tools with my home-use copy of Mathematica 10.2. Below is an animation of  the 10-year forecast of the information equilibrium model (or see here; update: added links) starting from the 1960s to today. A couple of the frames failed to fit using the default settings for TimeSeriesModelFit (for the extrapolations) and NonlinearModelFit (to fit the model), so instead of fixing what was wrong I took the lazy way out and just deleted them. Here's the animation:

There are three key things about the data we'd hope a model could see before they happened: 1) the 'great inflation', 2) the end of the great inflation and 3) the 'great moderation' and the trend toward lower interest rates. I'd argue the IE model sees all three of these things ... 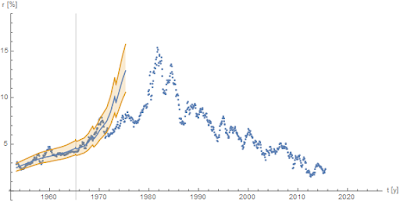 It's a bit early, but also is extrapolated from only 10 years or so of data.

2) End of the great inflation 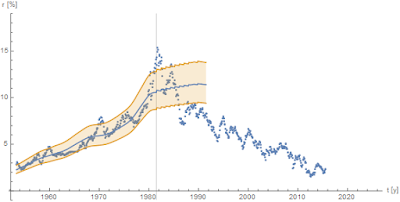 Note that at the point where this prediction was made, interest rates were still rising. 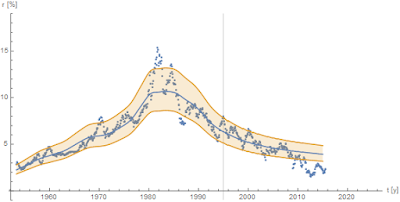 (The above graph is actually a 20-year prediction)


Additionally, the DSGE-form of the model gives a nice way to organize how this works.

Also, a side note -- I discovered that smoothing the monetary base data in the model, but not NGDP data gives a better fit to 10-year interest rates (first figure ... as opposed to e.g. smoothing both, second figure):

In a remarkable coincidence, John Cochrane discusses the downward trend in 10-year rates as well and links to a study by the Council of Economic Advisers.

So does Stephen Williamson.
Posted by Jason Smith at 5:00 AM