Update: Mark Sadowski (in comments below) correctly points out that there was no VAT change between 2008-2009. I have corrected my error in the figures and results. There is a tiny change in the conclusion (where the "VAT increase" is instead referred to as a "spike in inflation" in the second to last paragraph of the + 2 hour update)

Scott Sumner is linking to Mark Sadowski again and showing us that inflation as measured by the GDP deflator has risen in Japan since 'Abenomics' went into effect. However, the graph shown fails to take into account three two VAT increases -- which Scott Sumner explicitly pointed out might fool people -- that show up visibly in the GDP deflator data. Here's Sumner:

Japan will be hit by an adverse supply shock next year (higher sales tax rates) which will boost inflation–making it look like they will hit their 2% target. Don’t be fooled.

And here's the data and a version with the VAT increases filtered out ... If you remove these VAT increases, the change is less dramatic and the change appears to start before the monetary policy changes were announced. 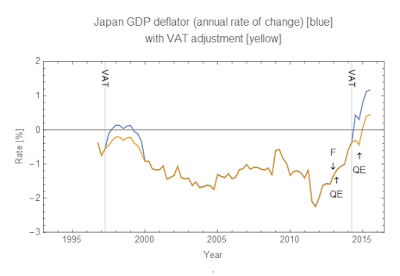 I make a pretty good case here that the change in direction of the price level (core CPI) is mostly due to the fiscal policy component. The information equilibrium model seems to get the data about right without any monetary policy effects. 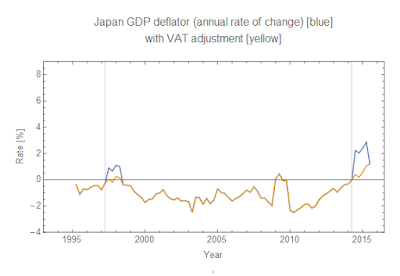 Also using a single year averaging means that the start of the increase in inflation is pushed all the way back to 2010 (that year is no longer impacted by the VAT increase spike in 2008). Heck, here's using only a single quarter 'average': 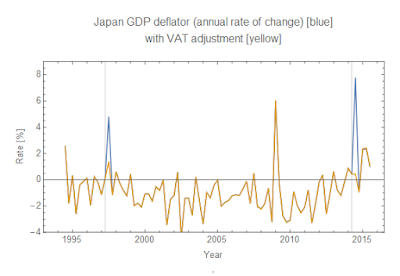 The trend towards increased inflation appears to start after the financial crisis; Abe appears in the middle of it.
Posted by Jason Smith at 12:30 PM