Combining the China model linked above with this post on employment growth, I thought I'd try to estimate the Chinese unemployment rate.

Here are the nominal shocks (see the post on employment growth): 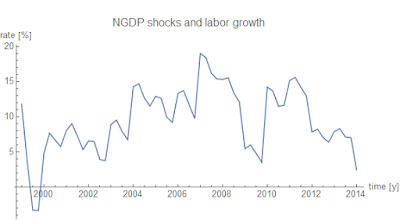 And here is an estimate of the resulting unemployment rate (making an assumption of 5% for the "natural rate" and a 50% employment-population ratio): 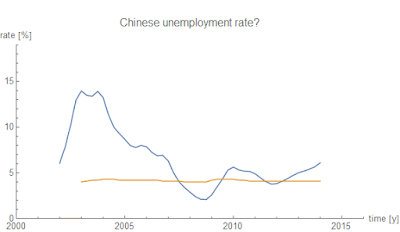 The yellow line is the 'official' rate (from here).

This is not to say unemployment isn't high today in China (the last NGDP data I have is from 2014). And China does not appear to be reporting the unemployment spikes from recessions. This of  course could be a difference due to the economic systems. While it seems to operate a large capitalist economy nowadays, the country is officially communist. Involuntary unemployment during recessions may not be the same thing there as it is in the US.
Posted by Jason Smith at 5:00 PM