Every decline of the same (log) scale in the median house price (FRED) as the current one has been associated with a recession. Of course, there have only been three times in the data since 1963 — the 1970 recession, the 1990 recession, and the 2008 recession.

As I have noted previously on twitter (and in my book), the Case-Shiller housing price index and wage growth have similar structure since the 70s (click to enlarge):

My hypothesis here is that "white flight" and de facto segregation has set up a dynamic where white people essentially drive up housing prices so much that they price themselves out of housing — requiring a crash of some kind. This dynamic is not entirely dissimilar to the hypothesized "limits to wage growth", where nominal wage growth between recessions climbs until it exceeds nominal GDP growth and triggers a recession. Which of these mechanisms is the more fundamental is not clear, but there was a recession without a (significant) decline in housing prices (Case-Shiller or median) in 2001. However the 2008 and 2018-9 (i.e. recent) declines in housing prices seem to have preceded (be preceding) declines in labor market metrics.

In any case, this looks like it could be a leading indicator — and some proposed mechanisms of recessions involve people thinking they're poorer than they used to be (e.g. their house isn't worth as much) and cut back on spending. As a side note, in the once hot housing market in Seattle where I live the "For Sale" signs seem to be sticking around for a lot longer than they used to [1].

The latest data came out this week and we're still seeing the non-equilibrium shock (per the Dynamic Information Equilibrium Model or DIEM) we saw in the last update: 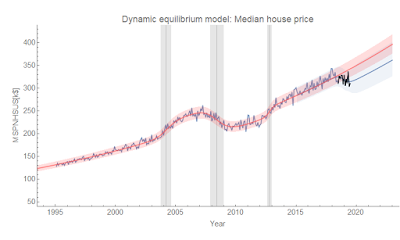 Also, rental vacancy data came out today and depending on whether the DIEM has a slightly negative dynamic equilibrium rate (−0.5%) or a 0% rate is still undetermined:

I've been following this for over two years now. However — no non-equilibrium shock to rental vacancies.