Calling a recession too early (and incorrectly)

A little over a year ago, I said that the JOLTS Job Openings Rate (JOR) data was indicating a possible recession in the 2019-2020 time frame based on the dynamic information equilibrium model (DIEM). It appears that even if there is a recession in 2020, this "forecast" will not have been accurate. This post is a "post mortem" for that failed forecast looking at various factors that I think provides some interesting insights.


As noted in the forecast itself, there was always the possibility of data revisions — especially in the March data release around the Fed March meeting. The March 2019 revision was actually massive, and affected every single data point in the JOLTS time series ... in particular JOR. It made the previous dip around the time the forecast was made largely vanish.


The original reason to look to JOLTS data as a leading indicator was based on the fact that the JOLTS measures seemed to precede the unemployment rate in terms of the non-equilibrium shock locations. In 2008, the hires rate (HIR) seemed to lead with JOR closely following. Closer analysis shows that HIR falls early in part due to construction in the housing bust (which also affected JOR). Now I speculated at the time that the ordering probably changed depending on the details of the recession. In the more recent data, it looks like the quits rate (QUR) might be the actual leader. This would make more sense in terms of a demand driven and uncertainty-based recession where people cut back on spending or future investments (or having children) and so seeing a rough patch ahead might be less inclined to quit a job.


Recently I noticed a correlation in the fluctuations around the dynamic equilibrium for JOR and the S&P 500. A rising market seems to causes a rise in JOR about a year later. When the forecast was made in 2018, the market rise of 2017 had yet to manifest itself in the JOR data. The "mini-boom" of 2014 along with the precipitous drop of 2016 made it look more like a negative shock was underway.

I should note that these fluctuations are on the order of 10% relative to the original model (i.e. less than a percentage point in estimating the rate), so represent a 10% effect on top of the dynamic equilibrium.


These various factors combined into a bad estimate of the JOR dynamic equilibrium that was much larger (i.e. higher rate) than it appears today. The rate was estimated to be about 25% higher (10.7% versus 8.7%), which meant a persistent fall in JOR relative to the forecast:

I should also note that the entropy minimization procedure (described here as well as in my talk at UW econ) has a much better result (i.e. well-defined minimum) with the additional data:

This did not affect the other JOLTS measures as strongly — and in fact the HIR data has shown little evidence of a "recession", especially since I discovered the longer HIR data series a couple months after the original forecast. The quits data has only recently been showing the beginnings of a deviation from the original 2017 forecast: 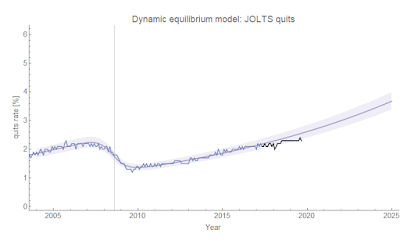 While all this is bad for my 2018 recession prediction, it actually means the dynamic equilibrium model was really good at forecasting the data over the past two years.
Posted by Jason Smith at 4:11 PM