I am frequently inspired by things Scott Sumner says; this one is no different (his posts tend to have the perfect combination of stuff I disagree with alongside sufficiently technical arguments that are interesting). Per my previous post, my answer to Sumner's correspondent is: Yes, the great recession would have still occurred. But Scott mentions Sweden in passing, so I decided to run the model for that country.

Here are the monetary base and GDP data I was able to cobble together from the Riksbank website along with the Swedish statistics database and FRED (only for 1986-2012, though): 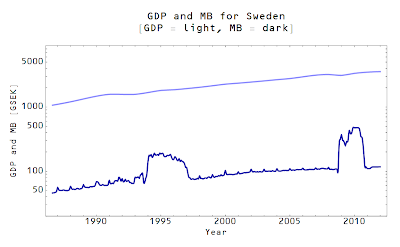 We get a great fit for the CPI: 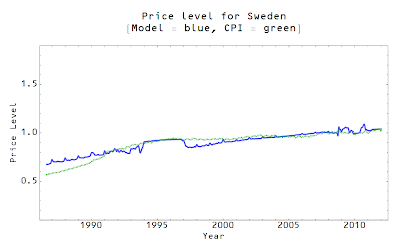 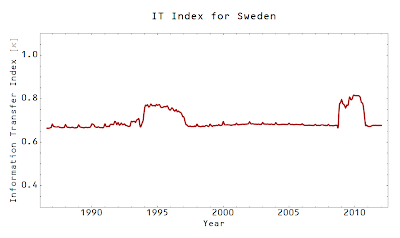 An almost constant information transfer index of 0.67 means they have an economy that is almost perfectly described by the quantity theory of money. Here's the 3D path, almost parallel to the ∂P/∂MB = 0 liquidity trap line (black):

Sweden jumped over the line twice: once during their financial crisis in the early 1990s and once during the global financial crisis of 2008. It seems it is possible to come back from these episodes if your information transfer index was low going in if you just return to the previous path. While inflation will probably be a little lower looking forward, it shouldn't be inconsistent with inflation before the 2008 crisis. The US may be able to take a lesson from this -- all the discussion of dire results of "tapering" and "exit" from QE may be unwarranted (part of my previous post was intended to say that QE didn't actually do anything since ∂P/∂MB = 0). 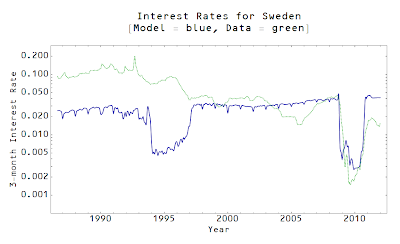 What happened in the 90s? Well, for one thing there was that financial crisis I mentioned. But why didn't rates fall to near zero? As best as I can tell, the answer lies in the same place as the answer for Australia: foreign denominated debt controlled the interest rates for Sweden.

UPDATE: Krugman and Wren-Lewis have written about Sweden's recent monetary tightening; unfortunately the only data I have for all relevant variables (CPI, GDP, MB) only goes to 2012 (the interest rate rise appears as early as mid-2010) so I don't have much to say about this ... except the statement that they have left the recent liquidity trap may have been premature. Since the interest rate model doesn't work very well (likely due to foreign currency denominated debt in the 1990s) there some difficulty in determining the liquidity trap interest rate. However, comparing to the two graphs directly above it appears the liquidity trap rate is near 1% which is where interest rates are right now.

**I am in no way trying to sway members of the economics Nobel committee with this title.
Posted by Jason Smith at 4:47 PM