The always excellent David Glasner posted this almost a week ago. I think the title was meant to be "The internal contradiction of quantitative easing opposition" as he points out that opponents seem to simultaneously hold the prima facie contradictory views that QE is ineffective and QE is dangerous. For the record, the information transfer picture says that QE is effective in some cases but not others, but never dangerous. As strong action by the Fed can help as a psychological backstop for a panicked market, QE can be of some help. This is outside the information transfer model; the model explains the "secular trend" around which the random fluctuations of the market (or measurement errors!) occur.

The post also made me think about what "good" monetary policy really is in the information transfer model. In one sense, good is good: high growth (the 1960s in the US), low inflation but not too low. However, to maintain that trajectory requires what might be called the monetary version of the caloric restriction diet: barely enough money to gather information from the aggregate demand. This leaves the monetary authority with the most control over the economy allowing it to speed up the economy or slow it down at will. In the graphic below, this scenario is keeping the economy on the left side where monetary expansion (adding boxes) moves you the farthest up or down (price level). 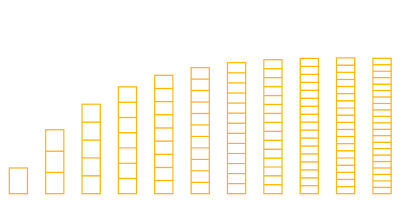 Should we let unelected central banks control our economies? If you say no, then living on the right side of the curve may be preferable. The central bank has little to no power over the economy; large changes in the number of boxes (monetary expansion/contraction) have little effect on the height of the stack (price level). Instead of caloric restriction, you can have as much food as you need. Japan has lived on the right side for the past couple of decades. In this scenario, you need a strong welfare state with automatic fiscal stabilizers because monetary policy can't alleviate the suffering in economic downturns.

The US (and the UK) have followed the cycle of advancing up the slope from the left side to the right (1890s-1930s, 1960s-2000s), having a major recession (Great Depression, Great Recession), undergoing accelerating inflation to reset the monetary system back to the left side (WWII, ???), then beginning again (in the 1960s, ???). I left question marks for the pieces we haven't done yet in the current cycle. This overall seems like terrible policy -- and is basically the result of not having the information transfer model and instead muddling through.

I was unable to find Good is Good by Kaito for the title reference, so here is Driving Manual Auto.
Posted by Jason Smith at 11:26 AM