The ITM + QTM approach has an additional result that says that for countries well-approximated by the traditional quantity theory of money, $r \approx 2 r_0$, or $r/r_0 \approx 2$, which is roughly true for the US since the depression (data are from FRED, I used GNP for years before the 1950s, and by $\Delta_y$ I mean the continuously compounded annual rate of change): 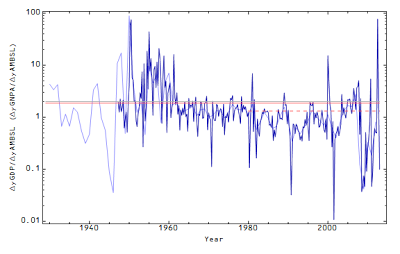 The gray line is $r/r_0 = 2$, the average of $r/r_0 = 1.87$ is shown as the red line and the dashed red line is the post-1980 average $r/r_0 = 1.31$. This lower value explains the deviation from the diagonal line (the traditional QTM) in the graphs in this post. It is not that countries with lower inflation rates don't obey the QTM. Countries with lower inflation rates apparently tend to have monetary policies that are too tight for a traditional QTM, but they can be described by a ITM + QTM theory with larger $\kappa$. From the ratios above, the average $\kappa = 0.53$ over the entire period shown, but the post-1980 average has been  $\kappa = 0.76$. Why this happens is not determined by the model, which only says that if $r/r_0 \approx 2$, then the traditional QTM is a good theory and that for high inflation rates, $r/r_0 \rightarrow 2$ so the traditional QTM works for countries with high growth in the price level. (But the traditional QTM does not necessarily follow for countries with high monetary base growth rates! Large $i \implies$ QTM, but large $r_0$ requires other knowledge about the economy like $r$ in order to see if $i$ is large and the QTM applies, or $\kappa \sim r_0/r \approx 1/2$ and the QTM applies.)

Note also that even the (shown) seasonally adjusted ratio is highly volatile -- likely illustrating one of the reasons the Fed doesn't target e.g. M2. It is also ironic that the point when Milton Friedman's ideas supposedly were at their peak was the point when the US started deviating more from the traditional quantity theory of money.
Posted by Jason Smith at 10:55 AM