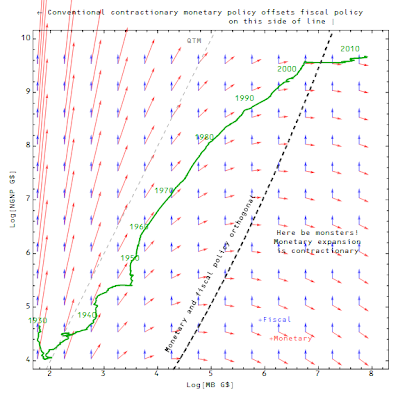 In the figure above, I plotted the vectors for a local perturbation from a point in MB-NGDP space for an increase in MB (red, "+ Monetary") and an increase in NGDP (blue, "+ Fiscal"). Since a change in the MB changes the price level, NGDP is changed as well in most cases, whereas an increase in NGDP, by say increasing government spending doesn't change the base. Well, at least to first order. The green line is the actual path the US has followed (with years labeled). The location where $\kappa = 1/2$ and hence the inflation rate is equal to the growth rate of the monetary base (i.e. the quantity theory of money) is the dashed light gray line. The dark dashed line shows where the vectors described above are orthogonal; specifically since all the blue vectors are the same this line shows where an increase in MB does not change the price level. To the left of this line is where monetary policy behaves conventionally ... increasing the base (expansionary monetary policy) leads to inflation. On the right side of this dashed line monetary policy behaves unconventionally ... increasing the base is contractionary! (This is a perverse effect if you have a conventional view of monetary policy. It would lead to something looking like Japanese-style deflation -- attempts to increase the base/stimulate would lead to more and more deflation.)

I think this helps visualize the effects I talk about here. I am in the process of trying to universalize this diagram in the sense of allowing one to plot different countries in the same space. Particularly, I think plotting this in $\kappa-\sigma$ space where $\sigma = Q^s/Q^s_{ref}$ will allow me to put US and Japanese data on the same graph. It will be the subject of an upcoming post; stay tuned.
Posted by Jason Smith at 5:58 PM