I briefly outlined the calculation of how increasing the monetary base creates real wealth in the previous post. I decided to show how much wealth creation is going on. The answer is not much most of the time -- the size of the monetary base relative to the economy is actually pretty small, so even a doubling would not result in a huge change in NGDP. Here is the graph. The nominal shocks from the previous post are in blue and the real wealth increase is shown in red (i.e. if the government prints $3 and $1 is eaten up by inflation, then what would be shown in red is the remaining $2): 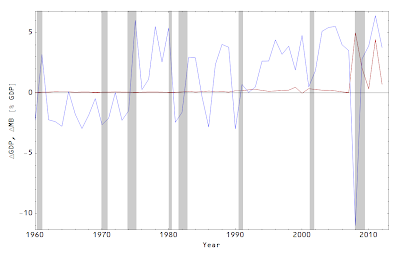 I also wanted to show these numbers on a shorter time scale. Here is the same plot using monthly increments instead of annual: 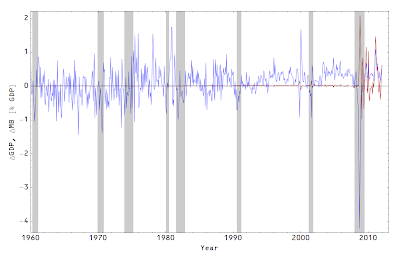 One thing to notice is how narrow the nominal shock associated with the great recession was. The peak can be fairly precisely timed to September 2008 (e.g. the failure of Lehman Brothers). While there is some small decline before the crisis the bulk of it happens between July and November. Additionally, there are no negative nominal shocks (i.e. GDP growth was always ahead of where you would expect from changes in the MB) from about 2003 until 2008. This cuts against the theory that the financial crisis did not cause the recession. 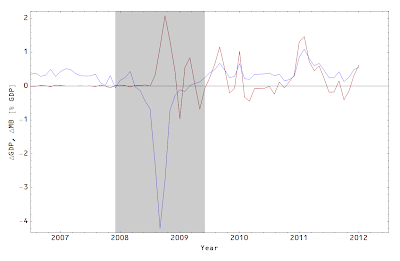