The long run in the UK

Paul Krugman linked to three centuries of economic data for the UK a few days ago. I decided to see how the information transfer model works over such a long time period. One limitation was that monetary data only went back to 1870, so we only have 140-odd years to work with. I had seen how the model does with data from 1986-2013 in this post (although it still involved extrapolation of monetary data). It turns out I needed to do a split monetary regime (monetary phase transition) around WWII, much like I did for the US. I highlighted the region where interest rates were pegged (see the previous link) from 1933 to 1949 in gray in the following graphs. Overall, I'd say the results are pretty good.

First, here is the price level model (I split the monetary regimes arbitrarily in 1950, model in blue and data in green, model description here): 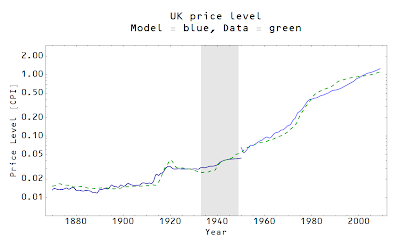 Second, here is the interest rate fit (model in blue and data in green, model description here). There is no split monetary regime for the interest rates as there is in the price level, just a single fit to all of the data. 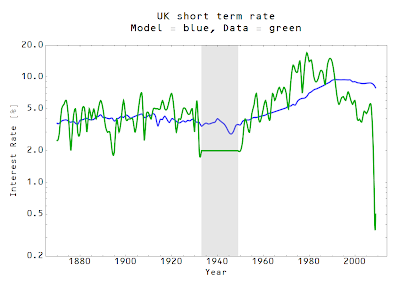 One caveat is that the long run monetary data does not include central bank reserves, which become a significant part of the base especially in recent years (which explains the deviations towards the end of the time series data). However, the results for the information transfer model including reserves were previously covered here; here is the plot of the interest rate results using this data: 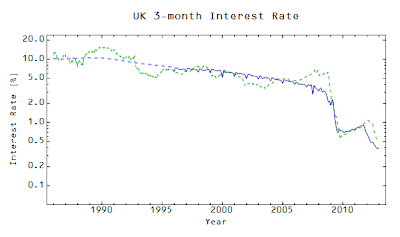 Here is a different version of the long run data where the fit is to the data from 1870 to 1986, and shows what happens if you add reserve data (in purple) and interest rate data (in red) from 2006 to the present: 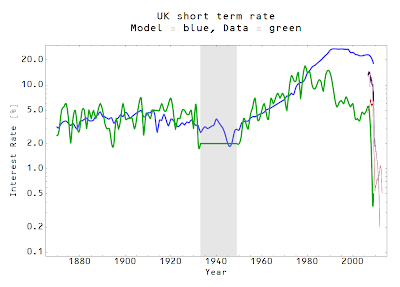 This fit seems to do better in the post-war period up until the 1980s where it appears the central bank reserves become significant. I will attempt to fuse all of the monetary data (reserves plus notes and coins, the full monetary base) in a later post.

Third, here is the plot of the path of the UK economy in (MB, NGDP) space in blue with the interest rate level curves shown in red (using the first interest rate fit, not the second) along with the information trap criterion (∂P/∂MB = 0), related to the liquidity trap, as black dotted lines. One thing to note is that the ∂P/∂MB = 0 line is different for the two monetary regimes (roughly before and after the pegged interest rate policy). 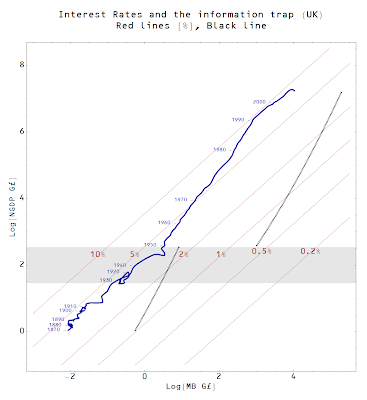