I mentioned in this post that I had hypothesized earlier that the RGDP growth was operating like a bound; I decided to re-do some of the graphs from the second link as well as this link using a "plucking" framework. So first is the the implementation -- instead of showing S(y) as a path (where y is the time variable) through NGDP-MB space fit to a line, I instead fit to a linear bound. The result is below (the bound S is shown as a line tangent to the black empirical path): 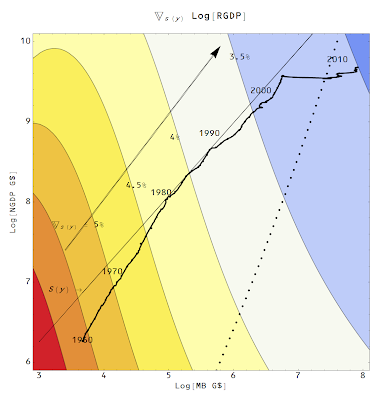 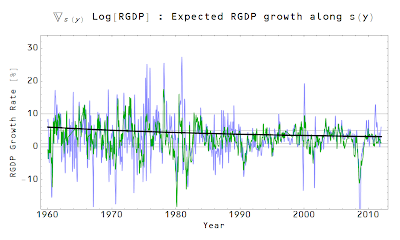 Already you can see some hint of an upper bound (the recessions all appear to be sharp downward falls with overcompensating rises afterwards). We'll take out the trend and look at the deviations from it to make this a little clearer (the recessions are shown in red): 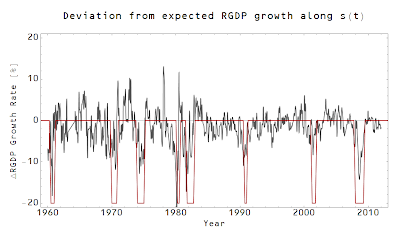 If we excise the recessions, it becomes even clearer (and the distribution looks more like random fluctuations around a mean): 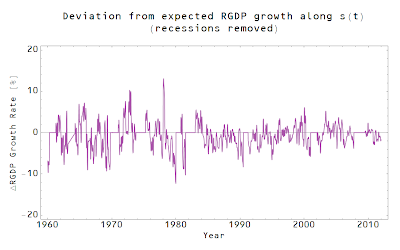 Here is the original distribution of fluctuations (black line) and with the recessions excised (purple): 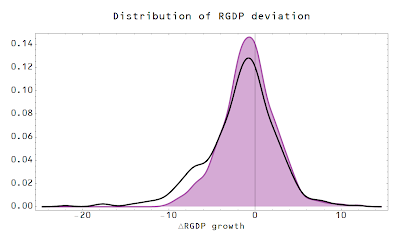 The distribution becomes noticeably more symmetric without the recessions (with a mean just below the trend, lending support to the plucking model). It is still not a normal distribution as it is much narrower than would be expected; it is not as narrow as e.g. a Cauchy distribution.

We can also look at deviations from inflation in this plucking framework:

Inflation it seems deviates systematically in both directions, in particular being unexpectedly low during the 1960s and rising during the oil shocks of the 1970s. The deviation from the expected inflation accounts for most of the deviation from NGDP growth: 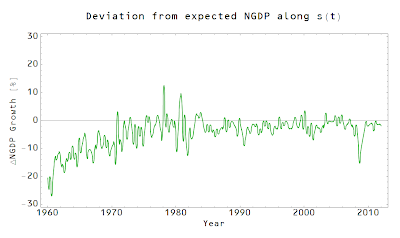 In the posts linked above, I pointed to the lack of inflation in the 1960s being a mystery (which shows up as lower NGDP growth than expected). The plucking model translated into an ideal information transfer bound (IS ≤ ID, with IS being the information received by the supply and ID being the information transmitted by the demand) could give a potential explanation. The US economy increased information transfer efficiency from IS ~ say 10% of ID to IS ~ say 50% of ID in the immediate post-war period (the numbers 10% and 50% are for concreteness; I don't know what the exact values are or even if they can be determined). While this didn't affect real growth very strongly if at all, it manifested as low inflation (and hence low NGDP growth). After about 1980 we reached the bound given by S(y). (Per the fit above, is the fit a bound at IS = ID? or is it just IS ~ ID? Again, I can't answer that.) From that point on we had the "Great Moderation" where inflation and NGDP followed the expected path given by the bound S(y) until the "Great Recession", a major fall in information transfer efficiency.

One final note is that all the graphs here are only slight changes from the graphs in the posts linked above.
Posted by Jason Smith at 2:50 PM