There was a recent post by Noah Smith that led me down the rabbit hole to a couple of older posts on Milton Friedman's "plucking" model (which is actually similar to the Keynesian concept of the output gap). Since the information theory model with imperfect information transfer leads to prices being systematically lower than an "ideal" price with perfect information transfer, I thought I'd see how everything works from this point of view.

I had already mentioned a few months ago that RGDP growth can be seen as noise plus negative deviations from some upper bound (i.e. the plucking model), but here is some more evidence (at least in unemployment).

If we take the unemployment model and use the "theoretical price" (aka the price level, in green below) as a bound for the model (blue), we obtain the following fit: 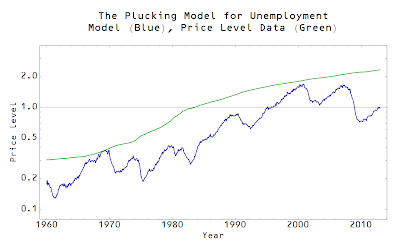 This already looks pretty good. Here is a version of the same information but in terms of unemployment rate: 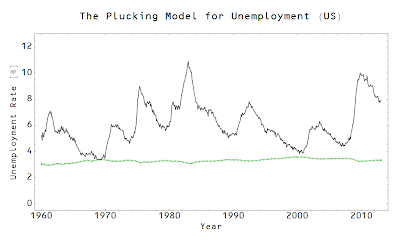 And in terms of a "plucking" shock deviation away from the trend (recessions are shown in red): 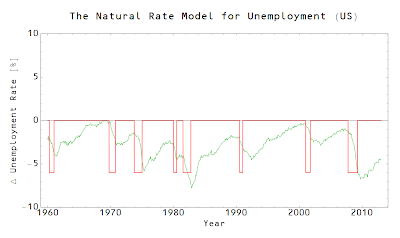 The beginnings of the drops (i.e. rising unemployment) line up nicely with the recessions. Now what about a different model, say, interest rates? This one is a bit inconclusive. Here is the fit to the 3 month US treasury rate (gray) using the model as a theoretical bound (black): 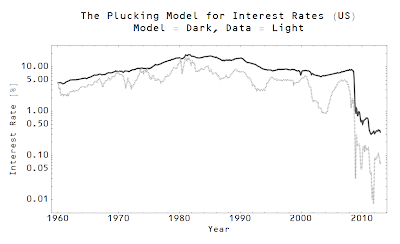 I had previously observed that the model could act as a bound back in September. Here is the analogous graph to the unemployment rate graph above, except this time it is the monetary base (since that is the denominator on the right hand side of the model) with the data in blue and the model calculation using the interest rate in black:

And here is the analogous plucking shock graph (again, recessions in red -- I look at the difference in the log of the MB since the base grows exponentially over the time domain and a fractional difference shows the exact same behavior): 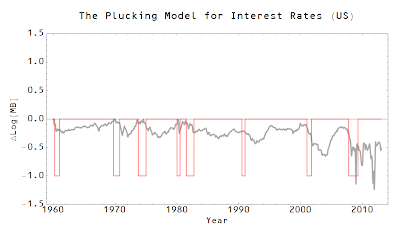 This one is less conclusive; if you use an ordinary fit, you get what could easily be random fluctuations around a trend: 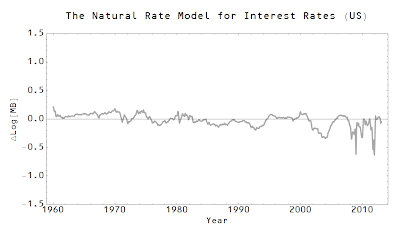 However, there is some encouraging news if you look at both sets of plucking shocks (interest rate, black and unemployment rate, green) on the same graph (the former normalized to the latter): 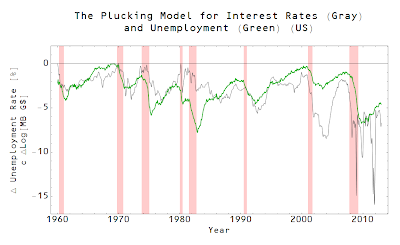 The shocks seem to be somewhat correlated except the 1980s and the early 2000s. Maybe those are different kinds of recessions? Both were Fed-induced (aren't they all, asks the monetarist), the former to curb inflation, the latter to create a "soft landing" for the dot-com bubble. One thing that is cool is that we could use graph above to use the unemployment rate to solve for the interest rate.

One final note is that the difference shown in the graph above represents the difference between IS ≤ ID where the former is the information received by the supply and the latter is the information transmitted by the demand. We do not actually know where the zero point should be -- it is possible we reached 100% efficiency (IS = ID) in the late 1960s or the late 1990s, but I doubt it.  They likely only represent the peak efficiency and that might represent only 50% efficiency (IS = 0.5 × ID) as we don't know e.g. the maximum theoretical information transfer efficiency of the market mechanism. However we can say the Bernanke era represents the lowest efficiency of the interest rate market of the past half century.
Posted by Jason Smith at 8:47 PM