Scott Sumner linked to Nick Rowe today which inspired me to run the numbers for Canada. Unfortunately I was only able to find monetary base data up to June of 2009 (any help?). At least it shows the start of the recession (which Nick Rowe says does not show up in the CPI data). Here is the reference for the model I'm using for the price level, and here is the reference for the interest rate model.

And here are the graphs (model in blue, data in green): 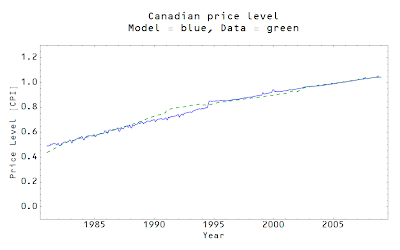 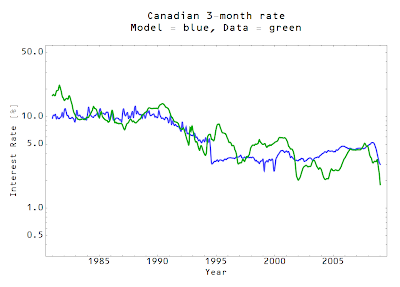 And here is where Canada appears in the scrum (see here for the definition of this plot): 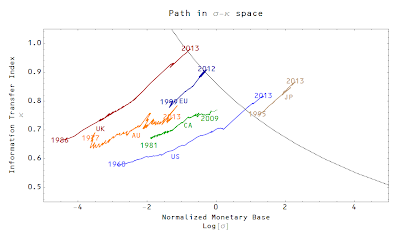 Basically, Canada is sort of halfway between the US and Australia hence it had a mild recession instead of not having one at all (AU) or a severe one (US). Canada returned to its pre-2009 trend after the recession, having only increased its monetary base by a small amount. Since I didn't have the actual data after 2009, I did an extrapolation from the piece of the trend I did have in the graph (small dotted green line). Canada appears to still be farther away from the "liquidity trap" (indicated by the information trap criterion, the dotted black line) than the US, Japan, the UK or the EU. Here is a graph of the path of the Canadian economy in MB-NGDP space analogous to this one for the US: 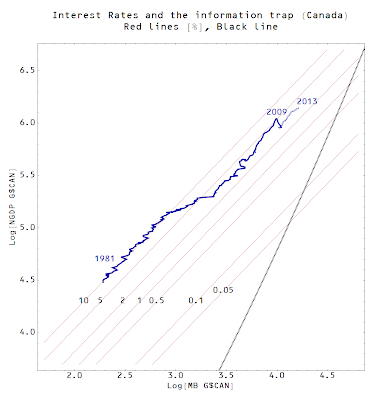 The liquidity trap rate is about 0.5%, but the current rates in Canada are above 1%.
Posted by Jason Smith at 10:32 AM