Apparently monetary offset only offsets things you don't like

For a rather humorous exercise in data analysis leading to confirmation bias you should check out the linked article presented in Scott Sumner's post from the other day.  Kevin Erdmann makes the rather paradoxical assumption that the integral of a distribution over one domain can be considered to be predictably proportional to an integral over a different domain when the distribution itself is changing (a fact of which he is totally aware and is trying to study). I'd like to talk instead about Sumner's response in which he says that unemployment is "over-determined" in the sense that if you tried to tease out the different factors leading to unemployment you could find ... well, let's just quote Sumner ... "multiple factors are each powerful enough to explain most unemployment".

That is excellent news. Everyone's model is cool!

Since apparently no one knows how to logically approach a problem anymore, I will demonstrate. Now you might not believe the underlying model I'm using, but at least this approach is coherent.

How does Extended UI affect the unemployment rate in the Labor Supply market?


I put together a model of the labor market in my effort to construct Scott Sumner's model. The basic premise is that the price level detects signals from the aggregate demand to the labor supply. Now these signals include individual decisions to sit around on the dole, leave the labor market, get a part time job, retire and every other possible reason someone would or wouldn't be considered a member of PAYEMS. This model does a good job of describing the price level: 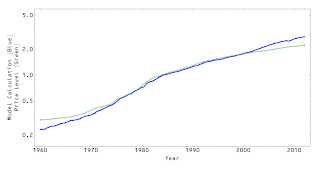 It does an even better job (at least for economics) with Okun's law (see the model link for the derivation): 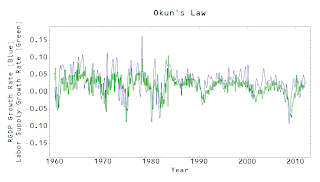 So if I was to ask the question: Does EUI increase the unemployment rate? My first task would be to address whether the current unemployment rate was consistent with Okun's law. Here are the data points and the model curve: 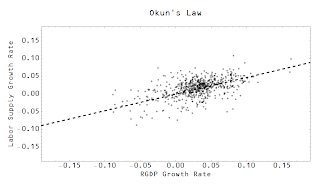 And here are the residuals and a 2-sigma error bar: 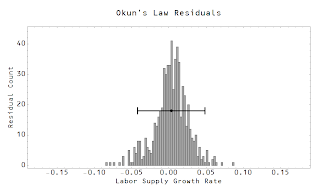 If we look at the residuals as a time series we can see that there is nothing special about this recession: 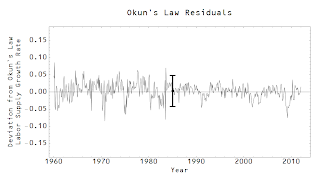 EUI started in 2008. There is always a deviation from Okun's law at the start of a recession (there is a statistically significant layoff over-reaction to the actual drop in RGDP) but the subsequent labor supply growth rates are exactly what we expected with no change to the relationship over the entire period from 1960 to today when EUI was not in effect. If we had seen a deviation then there might be a case to be made but this 1% order effect is deep in the noise.

PS My favorite rationale for why people are unemployed:


Because--more young adults are becoming unemployed on account of they can't find work! Basically, the problem is this: if you haven't got a job, then you outta work! And that means only one thing-- unemployment!
Posted by Jason Smith at 1:53 PM