Supply side reforms didn't accomplish anything

How's that for a provocative title? Scott Sumner is back with his claim that supply side reforms helped keep the US and the UK growing faster than other countries in the 1980s. More precisely, he believes that while most large economies showed slower growth after the 1970s, the reduction was less in the US and UK because of Reagan/Thatcher supply side reforms such as tax cuts on income and capital gains and moves to control inflation.

I will argue that only the moves to control inflation are responsible (monetary policy) and the resulting relative growth rates were actually baked-in immediately after WWII. 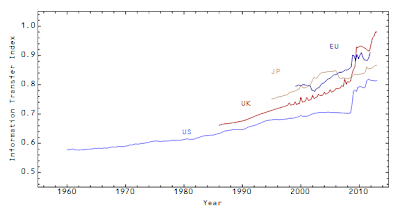 As you can see the information transfer index (IT index) is lower for the US and UK relative to Japan and the EU which generally means that increases in the monetary base have more impact than for countries with higher IT index. A better way to look at it is in normalized space: 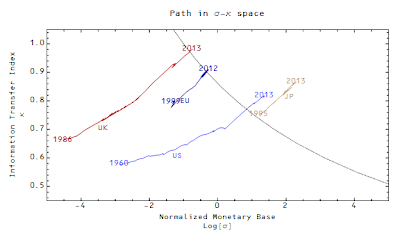 You can see the information trap criterion (∂P/∂MB = 0) line (black dotted curve). In general, low IT index and low normalized monetary base (see the link before this graph) mean you are farther from the information trap criterion and so monetary policy is more effective (increases in MB have a projection along the GDP direction, growing the economy).

I will demonstrate this with US data. I first extracted the non-monetary component of GDP (aka "shocks") growth like I did here. I then "grew" the economy from 1960 by inflating according to the growth in the monetary base and adding the shocks over tiny steps. With this procedure, you basically recover the path of NGDP from the start point in 1960. I show this in the following graph (solid line) along with two economies I "grew" with the same economic histories but a smaller IT index as well as a larger one (the higher and lower dashed curves, respectively): 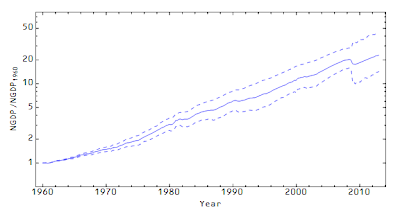 The first thing that is apparent is that the lower IT index has higher growth and vice versa given the same economic histories. A second interesting observation is that the quantitative easing undertaken in 2009-2011 and beyond would have actually boosted the economy if our IT index had been lower and the recession would have been worse if the IT index was higher.

It is likely the difference in growth rates among countries after the supply side reforms of the 1980s was entirely monetary. The tax cuts likely did very little. And why was the US IT index and base so low in the first place? GDP growth during WWII.

For completeness, here are the curves in normalized space and the analogous graph of the IT index shown at the top of this post: