In an earlier post I tried to extract the deviations from the trend that are the bread and butter of economics. In that post I link to Noah Smith explaining that:

You take a jagged time-series and you smooth it out, and you call the smoothed-out series the "trend". That's it. Whatever is left you call the "cycle", and you make theories to try to explain that "cycle".

But how much do you smooth? That's a really key question! If you smooth a lot, the "trend" becomes log-linear, meaning that any departure of GDP from a smooth exponential growth path - the kind of growth path of the population of bacteria in a fresh new petri dish - is called a "cycle". But if you don't smooth very much, then almost every bend and dip in GDP is a change in the "trend", and there's almost no "cycle" at all. In other words, YOU, the macroeconomist, get to choose how big of a "cycle" you are trying to explain. The size of the "cycle" is a free parameter.

My opinion is that this procedure is garbage.

I think the idea of the expected path I developed in my recent post is much better grounded; so what do the de-trended cycles look like according to that picture? First, here's inflation: 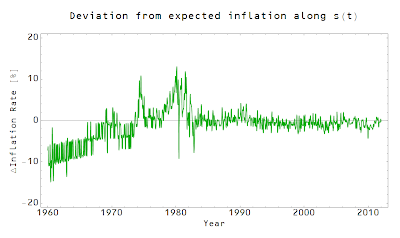 There were a couple of spikes in 1974 and 1979 (probably due to the oil crisis) but the big anomaly is that inflation in the 1960s was unnaturally low (as well as appearing to have some data issues). This is contra the prevailing narrative that inflation was high in the late 1960s through the 1970s and was countered by the resurgence of monetarism in 1980s.


How about RGDP growth? 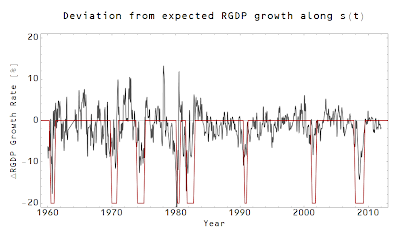 The recessions (red) line up nicely with significant deviations from the mean (which is slightly less than 0 meaning that the expected RGDP growth rate is potentially an upper bound). In fact, if we excise the recessions (see this post), we get a nice random sequence: 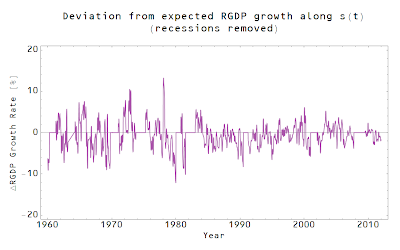 You can see the distribution of the residuals is pretty close to normal after subtracting out the recessions (the mean is -0.6% and the standard deviation is +/- 3.1%, the skewed piece from the recessions is also pretty obvious in the black line): 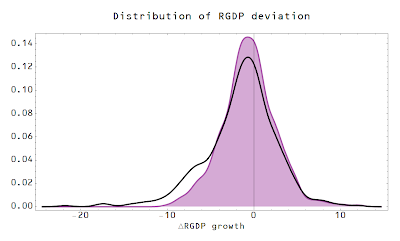