... that as long [a country doesn't] have large amounts of foreign-currency debt it’s very hard to tell any story in which interest rates surge and the economy slumps ...

which made me think about yesterday's problem with modeling the 3-month Australian interest rate. Was Australia's interest rate controlled by its own monetary policy during the 1980s? Sure enough, I found some data on the amount of foreign currency debt held by the Australian government and it turns out a large fraction was US dollar denominated: 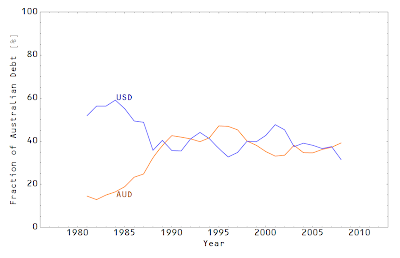 If we plot the previous fit alongside the US 3-month rate, the correlation jumps out at you (AUD 3-month in green, USD 3-month in dotted green and the model based on AUD monetary base in blue): 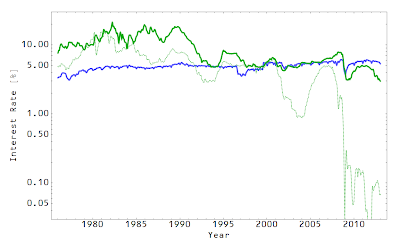 Taking even an oversimplified picture with an extended model that is the larger of the original AUD model interest rate and the USD 3-month rate data (dotted dark blue, and the curve using the USD model is solid dark blue), you can see that the deviation is no longer that mysterious: 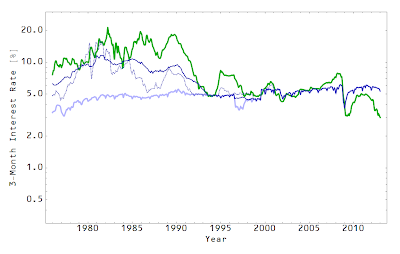 Eventually I might want to go back and do a better model where the two pieces are weighted by the fractions shown in the graph at the top of this post, but I think this is good enough for now.
Posted by Jason Smith at 2:06 PM